The Defense of Marriage Isn’t Over 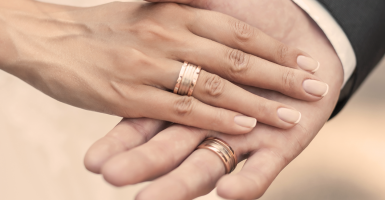 Monday’s action from the Supreme Court is, as I noted, a setback for sound constitutional self-government and a setback for a healthy marriage culture.

Rather than a single Roe v. Wade of marriage, where the Supreme Court would redefine marriage across the nation, the Court, by refusing to hear any of the marriage cases, has allowed lower federal courts to disregard the constitutional authority of citizens and their elected representatives to make good marriage policy.

Marriage is too important to allow unelected judges to redefine it without a fight.

Good laws that reflect the truth about marriage, frequently passed with overwhelming democratic support, have been struck down by judges without any compelling argument that they are unconstitutional.

We should recognize this for what it is: dozens of minor acts of judicial activism, rather than one major one.

If this is the case, where do we go from here? What should we do to continue defending marriage?

Marriage is too important to allow unelected judges to redefine it without a fight. Even if the umpires are colluding with the other team, that’s no reason to allow them an unopposed victory. Even if many of the courts of law are biased, we can still win in some of them—indeed many who favor redefining marriage think the 6th Circuit Court will uphold Ohio and Michigan’s marriage laws, and the battle continues in other circuits, including the 5th Circuit which will review Texas and Louisiana’s law (a federal judge recently upheld Louisiana’s law). And the composition of the Supreme Court might well change for the better before the Court ends up actually deciding the marriage question. We should use these legal battles as opportunities to make the case in the court of public opinion. Each legal proceeding presents an opportunity to educate fellow citizens on how constitutional self-government works, and to explain what marriage is.

2. Make the Case for Marriage

Nothing in these legal opinions changes the actual reality of what marriage is or why it matters—it simply codifies a faulty vision of marriage in law and thus makes it harder for future generations to understand and live out the truth about marriage.

Enacting same-sex marriage would replace the historic understanding of marriage with a revisionist view that marriage is fundamentally an emotional union.

Yes, laws that distort the nature of marriage will have an effect on people’s lives, but conservatives have never thought that law or government is the primary vehicle for social and cultural transformation. Even with bad laws about marriage, we still have a duty to speak the truth and encourage our neighbors to live out the truth.

Some people argue that marriage is simply a committed relationship of two people. My co-authors and I have argued that marriage is a comprehensive union of sexually complementary spouses—and that the state cares about marriage because it can unite a man and a woman as husband and wife to be mother and father to any children their union may produce. A comprehensive union capable of uniting children with their mom and dad is something only a man and a woman can form. So enacting same-sex marriage would not expand the institution of marriage, but would redefine it. Finishing what policies such as no-fault divorce began, it would replace the historic understanding with a revisionist view that marriage is fundamentally an emotional union. This would multiply the marriage revolution’s harms.

3. Protect Our Freedom to Speak and Act on the Truth

Now is the time to insist on the freedom to speak and act on the truth about marriage. Governmental recognition of same-sex relationships as marriages need not and should not require any third party to recognize a same-sex relationship as a marriage. We must vigorously advance the arguments for a classically liberal form of limited government and highlight the importance of religious liberty.

Protecting religious liberty and the rights of conscience does not infringe on anyone’s sexual freedoms. Although Americans are free to live how we choose, we should not use government to penalize those who think and act differently. Some will conclude that they cannot in good conscience participate in same-sex ceremonies, from priests and pastors to bakers and florists. They should not be forced to choose between strongly held religious beliefs and their livelihood.

At the federal level, Congress has an opportunity to protect religious liberty and the rights of conscience. Policy should prohibit the government from discriminating against any individual or group, whether nonprofit or for-profit, based on their beliefs that marriage is the union of a man and woman or that sexual relations are reserved for marriage. The government should be prohibited from discriminating against such groups or individuals in tax policy, employment, licensing, accreditation or contracting.

The Marriage and Religious Freedom Act—sponsored by Rep.Raul Labrador, R-Idaho,in the House (H.R. 3133) with more than 100 co-sponsors of both parties and sponsored by Sen. Mike Lee, R-Utah,in the Senate (S. 1808) with 17 co-sponsors—would prevent the federal government from taking such adverse actions.

States need similar policy protections, including broad protections provided by state-level Religious Freedom Restoration Acts (RFRAs) and specific protections for beliefs and actions about marriage. State RFRAs prevent the imposition of substantial burdens on sincere religious beliefs unless the government proves that such a burden advances a compelling government interest that has been pursued through the least restrictive means possible. States must protect the rights of Americans and the associations they form—both nonprofit and for-profit—to speak and act in the public square in accordance with their beliefs.

4. Defend a System of Constitutional Self-Government

The judicial usurpation of politics on the marriage issue provides an opportunity to remind citizens of the importance of elections and the importance of judicial nominees. Millions of Americans have had their voices and their votes discarded by a small handful of unelected judges—judges appointed by the president and confirmed by the senate.

Future elections can shape the courts, for better or worse. We must not allow this strategy of a dozen mini-Roes to become the standard way of liberal social change going forward. As former Attorney General Ed Meese and I argued last week in The Washington Post, in a system of limited constitutional self-government, the people and their elected representatives should be making decisions about marriage policy. While there are reasonable arguments on both sides of this debate, there is nothing in the Constitution that requires the redefinition of marriage—unlike, for example, the case of interracial marriage. Judges should not insert their own policy preferences about marriage and declare them to be required by the Constitution.

5. We Must All Take the Long View

Everything the pro-life movement did needs to happen again, but on this new frontier of marriage.

Consider the pro-life movement in February 1973, just weeks after Roe v. Wade. Public opinion was against the pro-life position, by a margin of 2:1. With each passing day, another pro-life public figure—Ted Kennedy, Jesse Jackson, Al Gore, Bill Clinton—“evolved” to embrace abortion on demand.

The media kept insisting that all the young people were for abortion rights. Elites ridiculed pro-lifers as being on the wrong side of history. The pro-lifers were aging, their children increasingly against them.

Whatever the law or culture may say, we must commit now to witness to the truth about marriage: that men and women are distinct and complementary, that it takes a man and a woman to bring a child into the world and that children deserve a chance to grow up with a mom and a dad.

Too many of our neighbors haven’t heard our arguments, and they seem unwilling to respect our rights because they don’t understand what we believe. It’s up to us to change that perception. We will help decide which side history is on.