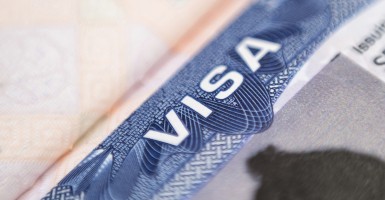 The Visa Waiver Program 'does not allow anyone willy-nilly to enter the U.S.,' Michael Chertoff says. (Photo: Getty Images)

A program that allows citizens from allied European countries to visit the U.S. without a visa has drawn new concerns from lawmakers who worry that radicalized Western Muslims will easily travel here to commit acts of terror.

But Michael Chertoff, the former secretary of the U.S. Department of Homeland Security who helped expand the program, argued today at The Heritage Foundation that limiting access to America would damage the nation’s economy and taint its reputation abroad.

That in turn would complicate President Obama’s effort to forge a committed alliance to confront the Islamic State, the terrorist group in Iraq and Syria also known as ISIS or ISIL.

“It would be the equivalent of conducting an operation that requires a scalpel by using a chainsaw,” he said.

>>> Watch: Visa Waiver Program and the Safety of America

Chertoff, the second chief of DHS under President George W. Bush following the 9/11 terrorist attacks,  rebutted critics who want to corral the Visa Waiver Program, which allows residents of member countries to visit the U.S. without a visa for up to 90 days. In exchange, America gets cooperation in security measures, information sharing and reciprocal travel privileges for U.S. residents.

Chertoff appeared at Heritage to counter a bill sponsored by a House Democrat that would suspend British, French and German citizens from visa-free travel to the U.S. because of “danger” caused by Islamist terrorists from those countries. The legislation, introduced by Rep. Tulsi Gabbard, D-Hawaii, singles out the European Union’s three largest countries as examples. It also would affect citizens from all 38 countries that participate in the program, including Spain, South Korea, Australia and Japan.

>>> Commentary: Amid Terrorist Threats, How Safe Are We?

“We are in a dangerous place in the world, perhaps more dangerous than any time in the last 10 years,” said Chertoff, now the executive of the Chertoff Group, a risk-management company. He added:

It has raised the question of the security of travel. Some have suggested a need to revisit the program. I am here to say that would be a huge mistake. It would be the equivalent of conducting an operation that requires a scalpel by using a chainsaw. You don’t achieve the mission, [and you] kill the patient as well.

As Europeans join the ranks of the radical Sunni jihadists who make up the Islamic State, U.S. lawmakers have sought new security measures directed at Western passport-holders.

Most proposals would ban known ISIS fighters from flying or take back their passports.

>>> UK’s Fox: We Must Stop ISIS Before It Becomes ‘University of Jihad’

Under Chertoff, DHS made the program more secure, instituting the Electronic System for Travel Authorization (ESTA), which checks various databases for information about an individual’s eligibility for travel to the U.S. and whether the person is a known security risk.

At any point in the process, officials can prevent individuals from entering the U.S if they are deemed to be a threat.

“It needs to be clear that the program does not allow anyone willy-nilly to enter the U.S. whether or not they pose a risk,” Chertoff said.

In an issue brief published last month, Heritage experts report that from 2000 to 2013, the number of visitors to the U.S. increased 36 percent to a record 69.8 million, with approximately 40 percent entering the country  through the Visa Waiver Program.

Adam Sacks, president of Tourism Economics and a panelist at the Heritage event, said the economy ran a trade deficit of $500 billion last year — but the travel sector achieved a $80 billion surplus.

In addition, Sacks said, foreign tourists last year spent $180 billion in the U.S., a larger amount than American exports of automobiles and food and beverages.

>>> For Lawmakers, an ‘Agonizing’ Decision on How to Confront ISIS

Sacks and Chertoff attribute this success in part to the Visa Waiver Program, which was launched in 1986. Cherttoff said:

I almost can’t calculate the cost to our national security and economy if we terminate this program. It would be hard not to see an immediate drop-off  in travel to and from the U.S. People wanting to do business would have to go into the visa process. We would have to staff up tremendously in terms of putting people overseas to manage the demand of visas. It would have an impact on the federal budget.

During a tumultuous time in the world, with Russian President Vladimir Putin interfering in Ukraine and war raging in Iraq and Syria, Chertoff said America should maintain a strong presence and not back away.

“At this time, more than ever, we don’t need to reduce in this area,” Chertoff said.

It would irritate our friends and allies who you go to when you put together a coalition like we have in Iraq and Syria. And it would give a boost to Putin, who would go to the Baltics and say, ‘They told you they were friends, but the U.S pitched you aside at the first sign of trouble.’