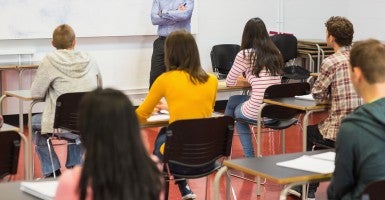 Two teachers have taken Pennsylvania’s largest teachers union to court over its attempt to decide which charities may be supported by teachers as an alternative when they decline to join the union on religious grounds.

The teachers, Chris Meier from Lancaster County and Jane Ladley from Chester County, are required—as a condition of employment—either to be a member of the Pennsylvania State Education Association or pay a nonmember “fair share” fee of $435.

Last spring, PSEA accepted Meier and Ladley’s status as religious objectors. In lieu of paying membership dues, state law instructed the teachers to pay a “fair share” fee to a charity of their choice.

Pennsylvania law stipulates that religious objectors must select a “non-religious charity” that is “agreed upon” by the union, but it does not specify a procedure or deadline for reaching that agreement.

Meier, an Advanced Placement economics and history teacher, chose the National Right to Work Legal Defense Foundation, which provides free legal advice and representation to teachers like himself.

But because that foundation represented teachers in unrelated lawsuits against the PSEA, the union told Meier his charity was a “conflict of interest,” and he must choose a different organization.

Meier, a father of three who calls himself a “bona fide religious objector” to the PSEA, was not going to give up easily.

“I want the freedom of choice—to be able to donate to the charity I choose,” he said in a press release.

Ladley, who is retiring this year after teaching students with learning disabilities for 25 years, initially chose a scholarship fund for high school seniors interested in studying the Constitution. But the PSEA sent her a letter in March saying she must choose a “nonpolitical” charity instead.

“I shouldn’t have to agree with the PSEA; that’s the whole point of being a religious objector,” she told The Daily Signal in a phone interview.

Ladley next selected the Constitutional Organization of Liberty, a charity that provides educational materials on the Constitution and American history. The teachers union didn’t respond to this second choice.

The two public school teachers, who are represented by lawyer Nathan R. Bohlander of the The Fairness Center, filed a lawsuit Sept. 18. They  argue:

The PSEA cannot maintain a unilateral ‘policy’ of withholding funds and restricting religious objectors’ choice of a substitute charity simply because the charity is, in the union’s view, ‘political,’ or otherwise takes positions with which the PSEA does not agree.

In blocking the teachers’ donations to certain organizations, Bohlander told The Daily Signal, the PSEA not only was enforcing “restrictive” policies but also being hypocritical.

“When the PSEA first told Ladley she could not give to political organizations, they gave her an approved list of 12 alternative organizations they supported,” the lawyer said.

After looking into those organizations, Bohlander found that “over half spend hundreds of thousands—or millions—of dollars on direct political lobbying,” while the organization Ladley chose is “dwarfed” in comparison.

PSEA spokesman David Broderic told The Patriot-News that the union only just learned of the lawsuit and is in the process of reviewing it. Broderic emphasized that  state law lays the foundation for the union policy.

We are charged with following the law. We make every effort to accommodate charitable requests. And we’ll continue to do that.

However, Bohlander said that promoting groups that the union fundamentally agrees with while inhibiting organizations with which it disagrees is “hypocritical.”

Now, Meier and Ladley’s donations are being held indefinitely in an interest-bearing escrow account —another issue their lawsuit seeks to address.

“There’s no mechanism for resolving this—it’s taken out automatically, and it can go out indefinitely without any resolution,” Bohlander said.

The PSEA faced an Oct. 9 deadline to respond to the complaint by Ladley and Meier.

“They are telling me which groups I have to choose,” Ladley said of the union. “It’s a wrong that needs to be righted.”

Broderic, the union’s lawyer, also told The Patriot-News that Ladley and Meier were among only eight educators with religious objections to the “fair share” fee whose designated charities were under union review.

Of the union’s 180,000 members, he said, 200 have religious objections to paying the fee and their charitable choices were approved.