8 Ways the Obama Administration Restricts Access to Information, According to the Associated Press 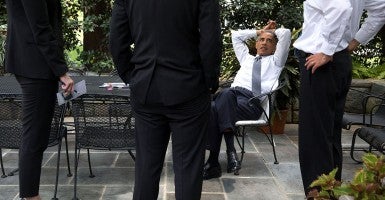 President Obama talks with staff on the patio outside the Oval Office. (Photo: Pete Souza/White House)

The Associated Press’ Washington bureau chief is the latest journalist to criticize the Obama administration for failing to live up to its promise of transparency.

“Bush was not fantastic,” Sally Buzbee recently told a meeting of journalists. “The [Obama] administration is significantly worse than previous administrations.”

Buzbee detailed eight ways the Obama administration is restricting access to information at a joint meeting of the American Society of News Editors, the Associated Press Media Editors and the Associated Press Photo Managers. Her comments were highlighted on the AP’s Definitive Source blog.

1) Journalists Can’t See the Fight Against Islamic Militants: Buzbee contends Americans are being kept in the dark about recent military action, noting that journalists aren’t allowed to take photos or record video of bombers when they take off.

2) Journalists Often Are Barred From Obama’s Meetings With World Leaders: Buzbee says previous administrations advocated for journalists to be present during the president’s meetings with world leaders when he is abroad. This change, she says, sends the wrong message to the rest of the world.

3) Access to Upcoming 9/11 Trial Is Restricted: Journalists do not have access to court filings in real time, Buzbee says, and even access to nonclassified information about the trial has been blocked or delayed.

4) Coverage of Guantanamo Is ‘Virtually Nonexistent’: Information normally released by the previous administration is now nearly impossible to come by. “The military won’t release the number of prisoners on hunger strike or the number of assaults on guards,” Buzbee says.

5) Sources Are Being Intimidated: Sources have told Associated Press reporters they could be fired for talking to the media. Buzbee called the intimidation tactics “chilling,” adding: “Government press officials say their orders are to squelch anything controversial or that makes the administration look bad.”

6) The Freedom of Information Act Is ‘Under Siege’: FOIA requests have become so expensive and delayed that many organizations are forced to sue federal agencies to get a response at all.

8) State and Local Governments Release Less Information: The Obama administration has tried to dictate to state and local governments what they can and cannot reveal, particularly when it comes to surveillance programs.