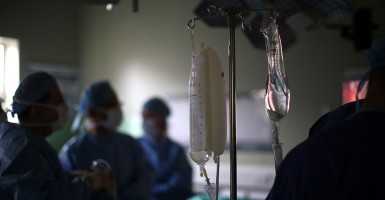 If you're on an Obamacare exchange plan, you might not ever see this many doctors in one room. (Photo: Getty Images)

Rules and regulations Obamacare imposes on insurance plans sold in the individual market make narrow networks and drug formularies all but certain, as plans curtail these coverage aspects to keep their premiums lower. This is because the law’s standardization of the benefits package not only increases costs, but also leaves little for plans to compete on other than the scope of the insurer-provider network and drug formularies.

Narrow Provider Networks. An analysis by the consulting firm McKinsey & Co. found that 48 percent of all exchange networks nationwide in 2014 are narrowed. This includes networks categorized as narrow, which means 31 percent to 70 percent of hospitals in the area are participating in the network; tiered networks, in which plans charge varying cost-sharing for different hospitals; and ultra-narrow, which have 30 percent or less of all area hospitals participating in the plan’s network. Nearly 40 percent of all narrowed networks — and 19 percent of all exchange plans nationwide — are classified as ultra-narrow.

Similar analysis has been done on other formulary trends in the exchanges as well.

It’s not surprising that plans are more focused on meeting government targets and dictates than competing based on consumer demands that would result in better quality and lower cost. Thus, as The Heritage Foundation has noted, “[A] precondition to any well-functioning, consumer-centered market is that lawmakers avoid unduly restricting either the options available to consumers or the scope for supplier innovation.”