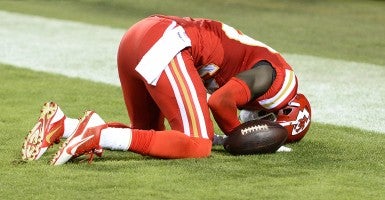 Kansas City Chiefs player Husain Abdullah kneels down to pray in the end zone after scoring a touchdown against the New England Patriots in the second half of their NFL game at Arrowhead Stadium in Kansas City. (Photo: Larry W. Smith/Newscom)

After making the sixth interception of his career, Abdullah, a Muslim, knelt in practice of the Sajdah, a prayer in which Muslims prostrate themselves in the direction of Mecca.

Abdullah’s act of prayer resulted in a 15-yard penalty for unsportsmanlike conduct.

The NFL rule book forbids players from partaking in “prolonged or excessive celebrations” and “players are prohibited from engaging in any celebrations while on the ground.” There is no written guideline for prayer in the rule book, but in practice, exceptions are often made for a player’s expression of their faith.

“If I get a pick, I’m going to prostrate before God in the end zone,” Abdullah told the Kansas City Star.

Abdullah said that the referees said nothing about prayer to him. According to Yahoo Sports, the head referee only cited “falling to the ground on the knees” in explanation of the penalty.

Abdullah also noted that the penalty may be due to the fact that he slid on his knees rather than the act of prayer itself.

“For me, I just got a little too excited,” Abdullah said. “I think it was for the slide.”

Fox Sports reports that Abdullah received “an outpouring of support on Twitter.”

On Tuesday, the NFL issued a statement about the incident: “Husain Abdullah should not have been penalized for unsportsmanlike conduct following his fourth quarter touchdown,” NFL spokesman Michael Signora told USA Today.

Abdullah should not have been penalized. Officiating mechanic is not to flag player who goes to ground for religious reasons.