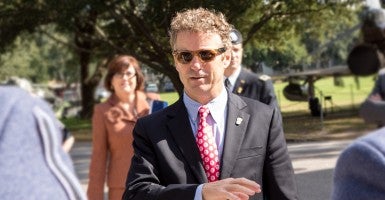 Doug Stafford says he and his boss, Sen. Rand Paul, got into politics the same way: through their church, which inspired them to develop pro-life principles.

Stafford, the executive director of RAND PAC and a close adviser to Paul, sat on a panel this past weekend at the Values Voter Summit in Washington, D.C., a gathering of social conservatives.

Stafford was there to sell Paul, the Kentucky Republican with a libertarian streak, as a potential 2016 presidential candidate who can bridge the divide between conservatives and libertarians.

>>>9 Senate Races That Could Tip the Balance of Power

“If we want to remove Democrats from the Senate and take back control of the White House in 2016, these are two groups that have to finally make sure that the overwhelming nature on which they agree ends up being the driving force and end up being something that really can push the left out of their position of power,” Stafford said. “Too often we don’t do as good a job as the left does in uniting for a victory for those things that we do share by arguing about things that we don’t.”

This week, Paul will travel to North Carolina to appeal to libertarian-leaning voters in a state with a hotly contested Senate seat.

Republicans are worried that third-party candidate Sean Haugh, a libertarian running for Senate in North Carolina, could siphon votes from Thom Tillis, the Republican who is challenging Democratic incumbent Sen. Kay Hagan.

If Republicans are to take control of the U.S. Senate, experts say, they will likely have to overcome third-party candidates, many being libertarian, who could play spoiler and take away votes.

The best way to do that, Republican strategists say, is to project the similarities of conservatives and libertarians, so as not to give voters a reason or alternative to vote outside of the two major parties.

Below, Stafford and other panelists from the event offer their opinions on how conservatives and libertarians share similar values.

“Value voters and libertarians have a lot in common: Respect for the Constitution: life, liberty and the pursuit of happiness. They also share the view that more expansive government upends self-reliance and diminishes self-worth. They both reject unelected judges. You see one judge upending the will of the people.” –Kellyanne Conway, Republican strategist and president/CEO of the Polling Company, Inc.

“The basis of conservatism is a desire for less government interference with less centralized authority with more individual freedom. This is a pretty general description also for libertarianism.” –Doug Stafford, executive director, RAND PAC

“Libertarians may be less religious. But both share a distaste for an assault on religious liberty.” –Conway

“Libertarians tend to get less percent of the ballot when Republicans are less open to the idea of liberty.” –Stafford

“There are way more libertarians who are pro-life than people realize. Ronald Reagan once said, ‘The heart and soul of conservatism is libertarianism.’” –Stafford

“[Rand] Paul says you could fix a lot of problems if people finished school, got married and had children, in that order.” –Stafford