5 Policies That Would Make Gas Cheaper 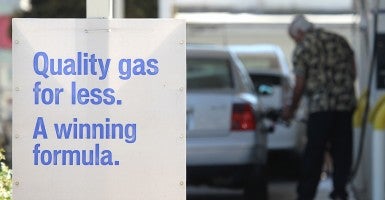 Sick of paying too much at the pump?

If you are, there’s good news: There are policies Congress and the Obama administration could implement that likely would lead to lower prices.

Because oil is a globally traded commodity, different factors around the world affect supply and demand, which in turn affects the price Americans pay at the gas pump. Growing demand for oil in other parts of the world, especially in rapidly developing regions such as India and China, put upward pressure on prices. Bad weather or geopolitical risks can disrupt supply, increasing prices. For instance, severe weather can shut down a pipeline or refinery, choking supply and driving prices higher.

The most effective response to variations in energy prices is simply to allow markets to work. Government restrictions, regulations and attempts to force technologies into the market impede the free market’s efficacy. To help American fuel consumers, Congress and the administration should:

1. Lift the ban on crude oil exports. Removing government restrictions on crude oil exports would decrease gas prices and grow the American economy by creating more opportunities to produce and sell oil and a more efficient system for refining it. A recent IHS study found that removing the ban would lower gasoline prices by 8 cents per gallon, saving motorists $265 billion over 15 years and adding nearly 1 million jobs by 2018.

2. Lift the drilling bans and approve the Keystone XL pipeline. Congress should lift the ban on exploration in the eastern Gulf of Mexico and the Atlantic and Pacific coasts and should conduct more lease sales off Alaska’s coasts. Alaska’s Arctic National Wildlife Refuge is another abundant source of oil, with an estimated 10.4 billion barrels of oil beneath a few thousand acres. Furthermore, if President Barack Obama had approved the permit for the Keystone XL pipeline when the State Department first concluded the pipeline was environmentally safe, the U.S. would have begun importing up to 830,000 barrels of oil per day from Canada to the Gulf Coast refineries as early as 2013. While predicting the exact impact of increased imports of Canadian oil on gasoline prices is difficult, increased domestic production would clearly have substantially benefited the U.S. economy. According to Citi Global Perspectives & Solutions, aggressive domestic production would yield significant economic benefits and put downward pressure on prices.

3. Repeal the Renewable Fuel Standard (RFS). More commonly known as the ethanol mandate, the RFS mandates that refineries blend increasing amounts of ethanol into gasoline each year, reaching 36 billion gallons in 2022. The Congressional Budget Office recently published a report showing the RFS will increase gas prices by 13 cents to 26 cents per gallon as soon as 2017. Multiple federal agency and government-backed studies demonstrate the RFS has harmed Americans, driving up fuel and food prices.

4. Prohibit greenhouse gas and Tier 3 regulations. The Department of the Interior has already suspended oil and gas leases because of their alleged impact on climate change, and refineries are a coming target of the Environmental Protection Agency. Its greenhouse gas regulations will block and increase the cost of energy production, and producers will pass those costs on to consumers. Yet the regulations will have no meaningful impact on the climate. The EPA also has finalized Tier 3 gas regulations to lower the amount of sulfur in gasoline, beginning in 2017. More stringent sulfur regulations could add 6 cents to 9 cents per gallon to the cost of manufacturing gasoline, and the EPA has acknowledged the more stringent regulation will produce no measurable improvement in air quality.

5. Repeal the Jones Act. Signed into law almost a century ago, the Jones Act mandates that any goods shipped by water between two points in the United States must be transported on a U.S.-built, U.S.-flagged vessel with a crew that is at least 75 percent American. By preventing foreign competition, the Jones Act significantly increases domestic maritime shipping prices, driving up costs for American businesses and consumers. A February 2014 International Energy Agency report estimates that repealing the Jones Act would reduce gasoline prices by 15 cents per gallon. The Jones Act creates an unnecessary and expensive hurdle for shipping crude oil from coast to coast, and Congress should repeal it.

High gas prices hurt consumers not only at the pump but also by raising the cost of all goods and services that depend on transportation. Higher prices mean families buy fewer goods and services, slowing economic growth and job creation. Congress should allow the market to determine prices by implementing free-market reforms to improve the market’s ability to respond.