Woman Arrested for Possession of… SpaghettiOs? 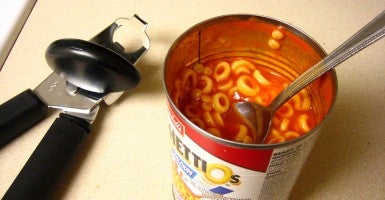 A Georgia woman has been released after she was arrested for possession – of SpaghettiOs.

According to the Gainesville Times, police arrested Ashley Huff, 23, when they found a “suspicious residue” they believed to be meth on a spoon inside the car she was riding in.

Huff was subsequently charged with possession of methamphetamine.

Huff repeatedly told police that there was “no way in hell” that the substance was drug residue, according to Hall County assistant public defender Chris van Rossem.

>>> The Extent of America’s Overcriminalization Problem

Huff was unable to afford her bail and spent more than a month in jail while her attorney attempted to arrange a plea bargain.

She was released only after the crime lab finally came back with the results of its substance analysis.

It was spaghetti sauce.

“I think she said it had been SpaghettiOs,” said van Rossem.

Jordan Richardson, a visiting legal fellow at The Heritage Foundation, said police are generally within their rights to make an arrest when there is probable cause, but did raise concerns about the plea deal Huff was considering before the results came back from the crime lab. “The scary thing is that when she was confronted with jail and a fine, even though she turned out to be innocent, it was easier to take the punishment,” said Richardson.

According to KRON 4, Huff is considering legal action.

This article has been corrected to reflect that Huff was arrested in Georgia, not Florida and to reflect Richardson’s comments accurately.