The Real Story About What Ended the Great Depression (Hint: It Wasn’t the New Deal) 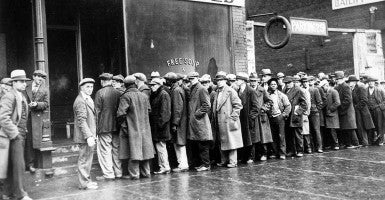 Unemployed men queued outside a soup kitchen opened in Chicago during the Great Depression. (Photo: Newscom)

My seventh-grade son recently wrote a U.S. History paper extolling the virtues of President Franklin Roosevelt’s New Deal. “It ended the Great Depression,” he wrote with great certainty. He’s only 12 and parroting what the history texts and his teachers told him.

Mr. Burns’ docudrama on the Roosevelts—for those who weren’t bored to tears—repeats nearly all the worn-out fairy tales of the FDR presidency, including what I call the most enduring myth of the 20th century, which is that FDR’s avalanche of alphabet-soup government programs ended the Great Depression. Shouldn’t there be a statute of limitations on such lies?

Ask nearly anyone over the age of 80, and they will say that FDR cared about the working man and “gave the country hope,” a point that Mr. Burns emphasizes. Roosevelt exuded empathy, which isn’t a bad thing—remember Bill Clinton’s memorable line “I feel your pain”?—but caring doesn’t create jobs or lift gross domestic product.

Nor does spending government money revive growth, despite the theories put into practice by the then-dean of all economists, John Maynard Keynes. Any objective analysis of these facts can lead to no other conclusion. U.S. unemployment averaged a rate of 18 percent during Roosevelt’s first eight years in office. In the decade of the 1930s, U.S. industrial production and national income fell by about almost one-third. In 1940, after year eight years of the New Deal, unemployment was still averaged a god-awful 14 percent. Former President Franklin D. Roosevelt and his wife Eleanor with their Scotch terrier Fala on the terrace of his house in Hyde Park, New York. (Photo: Newscom)

Think of it this way. The unemployment rate was more than twice as high eight years into the New Deal than it is today, and American workers now are angry as hornets. Imagine, if jobs were twice as scarce today, the pitchforked revolt that would be going on. This is success?

Almost everything FDR did to jump-start growth retarded it. The rise in the minimum wage kept unemployment intolerably high. (Are you listening, Nancy Pelosi?) Roosevelt’s work programs like the Works Progress Administration, National Recovery Administration and the Agricultural Adjustment Administration were so bureaucratic as to have minimal impact on jobs. Raising tax rates to nearly 80 percent on the rich stalled the economy. Social Security is and always was from the start a Madoff-style Ponzi scheme that will eventually sink into bankruptcy unless reformed.

The most alarming story of economic ignorance surrounding this New Deal era was the tax increases while the economy was faltering. According to economist Burt Folsom, FDR signed one of the most financially devastating taxes: “On April 27, 1942, he signed an executive order taxing all personal income above $25,000 [rich back then] at 100 percent. Congress balked at that idea and later lowered it to 90 percent at the top level.” The New Dealers completely ignored the lessons of the 1920s tax cuts, which just a decade before had unfurled an age of super-growth.

Then there was the spending and debt barrage. Federal spending catapulted from $4.65 billion in 1933 to nearly $13.7 billion in 1941. This tripling of the federal budget in just eight years came at a time of almost no inflation (just 13.1 percent cumulative during that period). Budget surpluses during the prosperous Coolidge years became ever-larger deficits under FDR’s fiscal reign. During his first term, more than half the federal budget on average came from borrowed money.

What is maddening is that thanks to this historical fabrication of FDR’s presidency, dutifully repeated by Mr. Burns, we have repeated the mistakes again and again. Had the history books been properly written, it’s quite possible we would never had to endure the catastrophic failure of Obamanomics and the “stimulus plans” that only stimulated debt. The entire rationale for the Obama economic plan in 2009 was to re-create new New Deal.

Doubly amazing is that at this very moment, the left is writing another fabricated history — of the years we have just lived through. The history books are already painting Obama policies as the just-in-time emergency policies that prevented a Second Great Depression. I wonder if 80 years from now, the American people will be as gullible as they are today in believing, as my 12-year-old does, that FDR was an economic savior.