Why Michelle Obama Was Wrong to Trash America at the UN 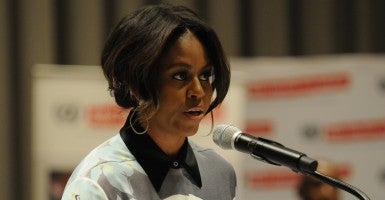 In her speech to the United Nations this week, first lady Michelle Obama chose to highlight some of the negative things women face in the United States today.

Successful women don’t have time to get sidetracked by gender-equality debates.

“Women here are still woefully underrepresented in our government and in the senior ranks of our corporations,” Obama said at the Global Education First Initiative event. “We still struggle with violence against women and harmful cultural norms that tell women how they are expected to look and act.”

The first lady, meanwhile, made no mention of women who are regularly raped and beaten in Afghanistan, forced to kill their female babies in China and not permitted to drive in Saudi Arabia. Those three countries, by the way, are members of the United Nations.

Obama correctly noted the “tremendous progress in areas like college graduation rates and workforce participation.” But is that really news to anyone?

Since the 1980s, more women than men have been graduating from college in America. According to data from 2012, the number of women who enrolled in college after high school rose to 71 percent, while the percentage of men remained stagnant at 61 percent.

So what about Obama’s claim that women are “woefully underrepresented in our government and in the senior ranks of our corporations”? It’s true that American women make up 47 percent of the workforce, according to Labor Department statistics from 2012.

But gender discrimination is not what’s behind our lack of female CEOs and government officials—and harping on that idea certainly isn’t what got successful female CEOs to those leadership positions.

Yahoo! chief executive Marissa Mayer, the 20th employee hired by Google, was asked how it felt to be the only woman on the search giant’s engineering team. Her reply? She hadn’t noticed. Marissa Mayer turned a successful career at Google into the top job at Yahoo!, where she currently serves as CEO. (Photo: Newscom)

Successful women who are becoming CEOs and senators don’t have time to get sidetracked by gender-equality debates; they’re too busy working their butts off to be the best person for the job, just like successful men.

And let’s face it, women sometimes voluntarily decide to put their careers on the back burner. A recent Pew survey revealed that 51 percent of women admit to interrupting their career path in order to have a family. Those who did so say “overwhelmingly … they are glad they did this, even though a significant share say it hurt their overall career.”

Then there’s this: Has Obama ever considered that not as many women may want to be in government or become CEOs?

Research shows that women have different interests, choose different majors in college and pursue vastly different career paths than men, generally speaking. The outcome of these choices is clearly going to affect the jobs they attain or how much they are paid.

The reality is that men and women will never be represented equally in corporations or government—nor should it bother us. So what if fewer women pursue careers in those fields? How about the underrepresentation of men in health care, communications and early childhood education? They’re just not as interested, but there’s no White House campaign to make them think they should be.

The next time Michelle Obama stands before an audience of countries where women are truly discriminated against—some forced to cover their entire bodies or have a male guardian with them in public—and complains that America struggles with “harmful cultural norms that tell women how they are expected to look and act,” forgive me if I’m a little embarrassed.

The United States serves as a role model for those countries that treat women as less than human. The first lady should confidently remind other countries they can be better and their women, too, can have the opportunities we have here in America.