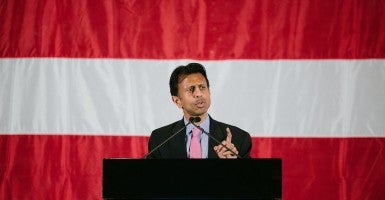 Washington may be, in his words, “phony and dangerous,” but Louisiana Gov. Bobby Jindal made it clear last evening that he’s aiming straight for the White House.

Jindal, serving up anti-Obama rhetoric, personal stories and jokes at the Values Voter Summit in Washington,  was the picture of a 2016 presidential hopeful who is primed to stump for GOP congressional candidates in the midterm races this fall.

At one point Jindal — sometimes criticized as wonky and stiff — induced laughs and cheers from the audience of social conservatives with a proposed tweaking of Bill Clinton’s internal campaign slogan from 1992 to “It’s the culture, Stupid.”

His red and blue tie complimenting the patriotic backdrop, Jindal swayed at the foot of the stage at the Omni Shoreham and avoided the podium at all costs. He threw out red meat throughout his speech, saying that President Obama, in his approach to combating the Islamic State terrorist group, “does not believe in American exceptionalism.”

@BobbyJindal said President Obama “does not believe in American exceptionalism.”

After declaring the most “worrisome” part of Obama’s presidency his “efforts to change the American dream,” Jindal told the story of his own unlikely success.

His parents immigrated — “legally,” Jindal quipped — to Louisiana from Punjab, India six months before Jindal was born.  They had not been on a plane before and were leaving a place where they lived with no electricity or running water.

Amar and Raj Jindal didn’t have insurance or much money, so they “worked out a deal with the doctor” to deliver Jindal.

“There was no Obamacare then,” Jindal said.

Portraying himself as a family man, Jindal also told the story of how his wife, Supriya, delivered their third child, a son named Slade, in a bedroom of their home.

Jindal, still in comedic form,  said he “fell in love with her all over again” even though the newborn “looked like [her] side of the family.”

With other potential Republican presidential candidates appearing at the Values Voter Summit and jostling for the crowd’s affection, Jindal positioned himself as a steadfast conservative.

Under his watch, he declared, Louisiana is the most “pro-life [state] in the country.” He also stressed his efforts to pull his state out from Common Core national education standards.

Jindal basked in the recently announced resignation of U.S. Attorney General Eric Holder, asking the audience: “Isn’t it great that he’s about to be out of a job?”

“Isn’t it great that he’s about to be out of a job?” says @BobbyJindal of Attorney General Eric Holder.

Wrapping up his speech, and relating to the social conservatives before him, Jindal criticized what he called Obama’s silent war on religious freedom:

As he prepared to leave the stage, clearly not wanting to be anywhere but there, Jindal promised that because “freedom is enshrined in our documents…we will take the country back.”