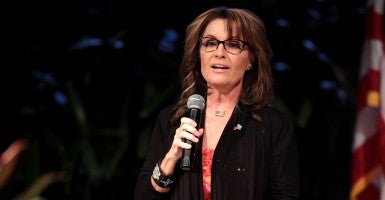 Sarah Palin colorfully roused an audience of social conservatives at the Values Voter Summit this afternoon, at one point mocking President Obama for his “latte salute” by raising a Styrofoam cup to her head after thanking U.S. troops.

Palin’s speech came across more like a roast — of Obama, liberals and the “lamestream media” — for the entertainment of a welcoming crowd at the Omni Shoreham in Washington.

The former Alaska governor and 2008  Republican nominee for vice president also got the address of the White House wrong, referring to “1400 Pennsylvania Avenue” instead of 1600. She later teased herself about the mishap on Twitter.

Doggone it! That explains why my Christmas cards keeps getting returned! pic.twitter.com/j4M35K963i

Here are 11 of the more memorable lines from Palin’s remarks: