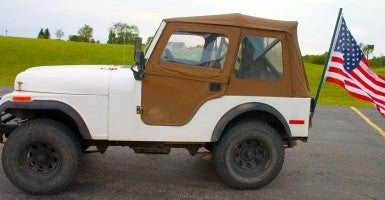 Administrators at a South Carolina high school confiscated American flags from students’ trucks on 9/11 as part of a rule preventing students from calling “an unusual amount of attention to oneself.”

On the 13th anniversary of the Sept. 11 terrorist attacks, four students at Woodruff High School arrived at school with large American flags propped up in the bed of their trucks as a way to commemorate the victims. Soon after they arrived in the student parking lot, the school’s principal, Aaron Fulmer, asked the students to remove the flags from their vehicles in recognition of an existing district-wide policy.

According to CBS Charlotte, “Fulmer reportedly told the students: ‘I’m not mad at you. We’re not upset at you. I applaud your patriotism.’” However, the policy was still enforced.

In response to complaints within the school community and a small protest held by parents and students the Monday after the incident took place, Fulmer told a local news station that school officials would be meeting with the student council in the near future to “look into a possible policy revision.”

“We certainly offer an apology to our veterans and anyone else we offended,” Superintendent Dr. Rallie Liston told FOX Carolina last Thursday. “That is the last thing we would do. This community is God-fearing and flag-waving. We love God and country here.”