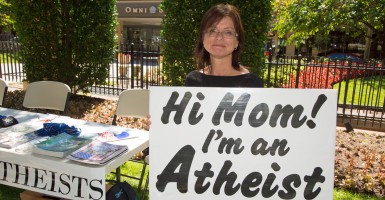 Five years ago, a group of atheist and agnostic students launched a campaign to hire a nonreligious chaplain at Tufts University. With the recent addition of a university-funded “humanist in residence,’ it appears their prayers—or lack thereof—have finally been answered.

The new position is believed to be the first-ever university-funded campus chaplain catering to atheist, agnostic and nonreligious students, according to Religion News Service.

In early September, Walker Bristol, a former intern of Harvard’s Humanist Community, was hired as the first humanist chaplain at the private, Massachusetts-based university. Bristol previously served as a student leader of Tufts’ Freethought Society, a group of roughly 150 secular students behind the initial campaign for a nonreligious campus chaplain.

According to the American Humanist Association, “Humanism is a progressive philosophy of life that, without theism and other supernatural beliefs, affirms our ability and responsibility to lead ethical lives of personal fulfillment that aspire to the greater good of humanity.”

Since its inception in 1941, the AHA has formed close relationships with a variety of progressive coalitions, such as the Center on Conscience and War and United for Marriage. Most recently, the AHA launched a national campaign encouraging people to “sit out the Pledge of Allegiance until the phrase ‘under God’ is removed from it.”

During an interview with Religion News Service, the Rev. Greg McGonigle, university chaplain, praised Tufts’ decision, saying the “importance, urgency, and complexity of religious-secular divides, discrimination, and differences” was the driving force behind his support for the humanist hire.

“[W]e believe having humanist leadership and involvement in our work is crucial to our efforts supporting students, educating the campus, and seeking to make an impact on the world,” McGonigle told Religion News Service.

Kimberly Thurler, director of public relations at Tufts University, confirmed to The Daily Signal that student fees and tuition dollars are being used to fund the humanist in residence.

Updated: This story has been updated to include Tufts University’s response to The Daily Signal’s inquiry.