10 Ways Conservatives Can Appeal to Hispanics (Without Becoming More Liberal) 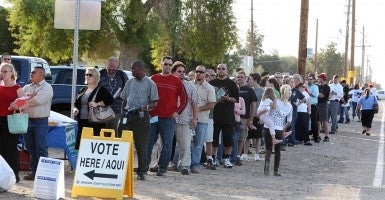 Far too many conservatives have grown pessimistic about the prospect of Hispanics ever agreeing with their policy prescriptions. Others have erred in the opposite direction, suggesting that only shifts in tone or even engaging in a pandering competition with liberals could fix the problem.

These approaches are wrong and self-defeating. If conservatives allow liberals to have a monopoly on Hispanic aspirations and dreams, they will find it increasingly difficult to enact their policies. At the same time, conservatives must understand that some of their problems with this demographic have structural aspects that require long-term solutions.

Here are 10 suggestions for how conservatives can start the arduous work of convincing Hispanics that conservative policies are better. They are found in my recently published book, “A Race for The Future: How Conservatives Can Break the Liberal Monopoly on Hispanic Americans,” which I will discuss with National Review’s Jim Geraghty tomorrow at 11 a.m., at The Heritage Foundation in a program introduced by Heritage President Jim DeMint.

1. School choice. School choice is the lowest of hanging fruits. Hispanics already like school choice, and they like it a lot. Whether it’s vouchers, charters schools, education savings accounts or tax-credit scholarships, the intensity of their support is even higher than those of non-Hispanic whites or Republicans. In June, the Friedman Foundation reported Hispanics had a higher margin of support for vouchers (+47 percentage points) than Republicans (+42 percentage points) and also higher intensity. School choice also is a classic “wedge issue.” It is the job of conservatives to explain that it is teachers’ unions, the cash cow of liberal politicies, which stand in their way.

2. Family formation. The ongoing breakdown of the Hispanic family is the big news that is never in the news. Although we hear much about the 72 percent out-of-wedlock rate among African-Americans, Hispanics’ 53 percent rate hardly ever makes headlines. But a rate that high militates against any hope of Hispanics ever supporting conservative causes in large numbers. Illegitimacy stands upstream from nearly all the societal pathologies that lead people to fall prey to dependency on government. Conservatives must make it their job to help Hispanics get that rate down.

3. Get them to become savers. Education and family have to do with what social scientists refer to as human and social capital, respectively. Financial capital is the stuff in the bank. Hispanics in this country are famously underbanked or even unbanked, which means they don’t use banks enough or even at all. Sending remittances home often prevents capital formation here. Studies show the habit of saving by itself, regardless of how much is saved, is a great predictor of the ability to become upwardly mobile. Policies that will make Hispanics save more will make them more independent of government and thus more likely to be conservative. 4. Show them how liberal policies have put them in a hole. It’s important for conservatives to not only offer a positive policy agenda that gets Hispanics out of a hole, but also to explain how liberal policies have put them there. Dependency on government helps undermines the family, and liberals’ aggressive marketing of food stamps, Obamacare and other government services to Hispanics should be blamed for contributing to family breakdown. Multiculturalism, another liberal policy, has only balkanized Hispanics and prevented them from joining the mainstream.

5. Give them their proper stake in the culture Without Mexico’s cultural imprint, the Southwest would be a scorching version of the Midwest, which for all its allure simply lacks the legendary nature of the Wild West. Mexican-Americans should take great pride in this country and its history, as they helped chisel out the culture of one of its iconic regions. There were Mexicans at the Alamo—fighting on the Texans’ side against Santa Ana—and the first provisional vice president of the Texan Republic was a Mexican-American. This history doesn’t get taught as much as it should because the liberals in charge of our education prefer to emphasize divisiveness, a history of discrimination (which all immigrants have suffered from) or such synthetic PC-ness as “Cinco de Mayo.” Conservatives should emphasize the cultural importance of Mexican-Americans to the making of the American spirit. You give a man a stake in something and he will want to conserve it, which is after all how you make conservatives.

7. End Bilingual Education. Bilingual education often ends up being a sad misnomer—many of the “bilingual” education programs und up being monolingual, meaning only in Spanish. This prevents Hispanic kids from getting one of the tools that will lead to success: proficiency in English. Bilingual ed also separates Hispanics kids from their future compatriots at a key time in their development. 8. Ask them if they want to replicate conditions that made them abandon their homeland. This should be a no-brainer. Why would someone from Cuba or Venezuela want to see here the big-government policies that have ruined their lands, or a Mexican the statist and pro-union policies that has prevented Mexico from enjoying its oil wealth. Indeed, why would anyone who emigrated here from anywhere between the Rio Grande and Patagonia want the absence of the rule of law or of strong property rights that haunts part of the region? As for volunteerism, former Mexican foreign minister Jorge Castaneda wrote in his masterpiece “Mañana Forever:” “In the United States, there are approximately 2 million civil society organizations, or one for every 150 inhabitants; in Chile there are 35,000, or one for every 428 Chileans; in Mexico there are only 8,500, or one for every 12,000.” Why would any Hispanic want that here?

9. Return to assimilationist policies. I am often asked whether today’s immigrants share American values, and the questioners almost always assume the answer is no. As the point above makes clear, sometimes no doubt it is. But America has been a country of immigrants for four centuries. And not all of those who arrived from County Cork, Eastern Europe or Sicily came believing in a strong work ethic, the creed that many societal problems can be solved by civil society through volunteerism and an abiding trust in the superiority of rule of law over rule of man. Assimilation is what made people the world over understand the American system. It is self-defeating that we have stopped encouraging it.

10. Explain to them that it’s not a question of being dependent or not, but of depending on someone in your family, in your community or circle of friends, or on a government bureaucrat. Liberals have done a good job at depicting conservatives as uncaring individualists with a devil-take-the-hindmost philosophy—so good that even some conservatives bought the stereotype. Not even libertarians can be reduced to such tropes, and definitely not conservatives, who understand dependency is part of the human condition. The only question is whether we depend on relatives, friends or others in our community or whether we turn to an impersonal bureaucracy that simply doles out help without any understanding of need or responsibility. Hispanics get human interdependency and will respond well to policies that help relatives and neighbors set up mutual-aid networks.