UK’s Fox: We Must Stop ISIS Before It Becomes ‘University of Jihad’ 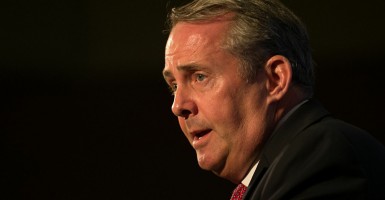 'A battle of ideas': Liam Fox speaks at The Heritage Foundation.(Photo: Tommy Gilligan)

If the world does not destroy the terrorist group ISIS, former British Defense Secretary Liam Fox said today, “they will become the University of Jihad, ready and willing to export their graduates to wherever they can do the greatest damage.”

His comments about the Islamic State, the jihadist army of radical Sunni Muslims also known as ISIS or ISIL, came as the United States and allies in the region launched the first airstrikes against the terrorists in their home base of Syria early today.

American intelligence officials have said that roughly 15,000 foreign fighters, many from Britain, are in Iraq and Syria as part of various armed groups. ISIS is particularly successful at recruiting from the West, Fox said. ISIS poses an immediate threat to the populations that fall under their control,” he said, adding:

They also pose a risk of further destabilizing the region and potentially taking us to the edge of a Sunni-Shia conflict that threatens to ignite the whole of the Middle East. If left alone, they will become the University of Jihad, ready and willing to export their graduates to wherever they can do the greatest damage.

Fox, a conservative member of Parliament, served as UK defense secretary from May 2010 to October 2011. The Daily Signal pulled the following remarks from his speech at Heritage and the question-and-answer session that followed.

On the fight against ISIS as a broader “battle of ideas and ideology”:

“The real failure of the West has been a failure to understand [the ISIS] psychology and belief system. Everything we stand for [is] an existential threat to their medieval, misogynistic, barbaric values.

“There are those who hate us not because of what we do, but because of what we are. Yes, we should intervene militarily when we have to. [But] this is a battle of ideas and ideology. We have to start winning that battle. Only one of us can triumph, and it must not be them.”

On President Obama’s assembling a global coalition as part of his strategy to fight ISIS:

“It’s a very good idea. Working with a coalition when possible shows this is not just a western-enforced objective…

“But the United Kingdom has not been a part of the strikes. That did not stop the beheading of a British citizen. ISIS sees everything as being driven by the West. We cannot convince ISIS of these distinctions.”

“We have allowed wishful thinking to take the place of critical analysis in far too many situations in recent years, particularly in our dealings with Russia. When we drew red lines over the use of chemical weapons in Syria and then abandoned that unceremoniously, Putin had a very good idea what our response would be to the annexation of Crimea.

“Russia still believes in the old Soviet view that Russia should have a sphere of influence — in other words, a veto on the policy decisions of its neighbors. We take a completely different view and believe that sovereign nations have a complete right to self determination.”

On how to respond to Russia’s intervention in Ukraine:

“ISIS clearly reached a point where military intervention was required. That is not in the cards in Ukraine. Economic sanctions are the best way to get Russia to behave. It’s about getting them to understand that they need the West more than we need them.”

Western military intervention in Ukraine is “not in the cards,” says @LiamFoxMP

On the welfare state:

“There is no doubt that properly targeted welfare that includes incentives and discourages dependency can play a major role in both poverty reduction and in wealth creation. We need, however, to ask whether specific programs are necessary in an indebted economy, whether the same effect could be created in another way and whether the government is best placed to be the provider of these services.”

On the referendum on independence for Scotland and voters’ decision to preserve the union:

“This was a wake-up call to force people to look at our history and future. There were three groups that stand to gain [from a split in the United Kingdom] and one of those was Russia, because you’d have seen a weakening of NATO.

The Scottish independence referendum was a “wake-up call,” says @LiamFoxMP

“The turnout was astonishing, and the results showed that people just thought we are better off being together.”