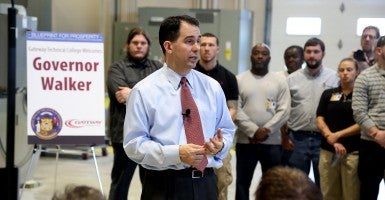 MADISON, Wis. — Three years ago, Wisconsin Aluminum Foundry Co. Inc. was begging for workers and struggling to hire candidates who could simply pass a drug test.

Good jobs, paying $15 to $20 per hour, went unfilled. The company even hesitated to expand because it could not find enough drug-free applicants.

Company president Jim Hatt said the economy is so slow the market has begun to attract more qualified workers. Business still is not where he would like to see it, but now he can find employees who can pass a drug test, which he says the company is forced to do by its insurance company.

Gov. Scott Walker appears to be taking such concerns to heart.

The Republican governor on Sunday unveiled his jobs plan for his next term, should he survive what polls show is his dead-heat gubernatorial race against Mary Burke, a Democrat, former commerce secretary under Walker’s predecessor Jim Doyle and member of the Madison Metropolitan School Board.

But the most controversial points are the governor’s proposals to require drug testing for individuals filing for unemployment and for “able-bodied, working-age adults requesting food stamps” through the state’s FoodShare public assistance program.

The bottom line, Walker says, is the bottom line: Taxpayers shouldn’t have to pay for public assistance programs for individuals who can’t pass a drug test.

Burke and her supporters have ripped Walker for missing the mark on his 2010 campaign pledge that Wisconsin’s economy would create 250,000 jobs during his first term. The number, to date, is north of 100,000, but it’s a long way from the massive contraction under Doyle, Walker’s allies point out.

“Wisconsin is back on under Governor Walker, and voters cannot forget the poor results and extreme mismanagement of the Doyle-Burke Administration that caused 133,000 jobs and 27,000 businesses to flee the state,” said Republican Party of Wisconsin Executive Director Joe Fadness in a statement.