Why Can’t We See This in the Cinema? 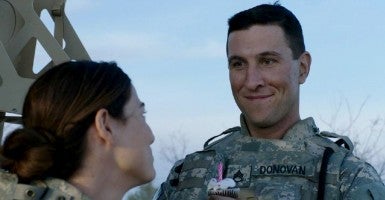 Of late, Hollywood has given us all kinds of movies about the military. The worst of them—such as “Green Zone,” a dreadful 2010 film that rightfully bombed at the box office—demonize and diminish our men and women in uniform to feed Tinseltown’s impulse to please the Code Pink crowd.

But sometimes, a maverick movie breaks out that portrays the heroic side of service. Films such as “Lone Survivor” (2013) often get scorned by the left and snubbed at the Oscars but earn significant applause in the theater.

Life is not easy for many veterans. They make up a significant portion of the homeless population. About 18 per day commit suicide.

It’s all too rare we see movies that humanize those who fight for us, that deliver a truly honest portrayal of the difficulties of balancing service and sacrifice. There is a movie that’s getting a limited theatrical release that does just that.

“Fort Bliss” is the fictional account of an Army medic who returns from combat deployment overseas and struggles to reconnect with her five-year old son. Filmmaker Claudia Myers found inspiration for the film from working with the military.

“It made me realize I’d been very sheltered from this aspect of the war,” she said in a recent interview. “I didn’t understand….there was a story there to be told.”

There is more than a little realism in this story. And, that’s something America needs more of. There has been an outpouring of concern for veterans who have served since 9/11, but much of that empathy has been a reaction to the costs of conflict. But there are more than 22 million living veterans, and life is not easy for many of them. They make up a significant portion of the homeless population. About 18 per day commit suicide. Nearly a half-million are living with wounds sustained in Iraq and Afghanistan.

Through it all, they are veterans, not victims. They want to be like the rest of us, to come home and reconnect with jobs and families. A movement has arisen to press communities to have a more realistic appreciation for America’s veterans and to understand better how we can serve them.

That said, there ought to be more films like “Fort Bliss,” but Americans would never know that if they don’t get to see the film. The film has gotten rave reviews at a handful of screenings, such as one at the GI Film Festival where it won the award for Best Narrative Feature, but that’s about it. Today the film opens in limited release in just three theaters in New York, California and Texas. If it does well, it might earn more screens along the way.