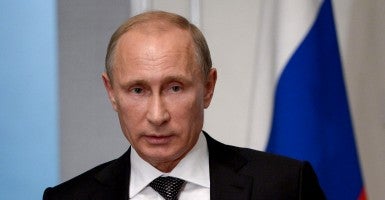 Russian propaganda specialists, political technologists if you will, are flooding the Internet with redrawn maps of Ukraine, shrinking the country to half its actual size.

On the new Russian maps, all that’s left of Ukraine is western Ukraine. Eastern Ukraine has been renamed Novorossiya (New Russia). The brain behind the Russian propaganda surge is former KGB man, Russian President Vladimir Putin. Putin is counting on the power of images over reality. It is classic propaganda with a new set of tools.

Nobody who lives in that part of the world today ever thought of themselves as living in Novorossiya and bearing allegiance to it—at least until several months ago. Now, Novorossiya is being imagined into being: Russian media are showing maps of its ‘geography,’ while Kremlin-backed politicians are writing its ‘history’ into school textbooks. There’s a flag even a news agency (in English and Russian.) There are several twitterfeeds. It’s like something out of a Borges story—except for the very real casualties of the war conducted in its name.

The new fictitious maps fit with the Russian propaganda surge against Ukraine since demonstrations started in Kiev last November. Directed by the Kremlin’s new propaganda office, Russia Today, portrayals of Ukrainian demonstrators as neo-Nazi thugs were common in the Russia and even penetrated Western media. The reward for the Russian government was hesitation on the part of Europeans to deploy effective sanctions against Russia. But the Russian propaganda machine, which draws on Soviet era traditions, has other elements as well. According to the Wall Street Journal, the office of Russia Today television, which in 2005 was renamed RT, has plans to grow its Berlin-based staff from two to at least 30. In late August, the Russian government publically announced a $39 million budget increase for RT in order to open a channel in French. This will complement RT’s existing English, Arabic and Spanish services.

The purpose of RT is to challenge Western broadcasting dominance and improve Russia’s flagging popularity in Europe. Russian aggression has produced renewed support for NATO as a guarantor of European security, something that Russia hopes to crush. Only 15 percent of Germans consider Russia a trust-worthy partner, while 35 percent trust the United States. (That percentage isn’t great, but it’s at least better.)

The Russian aim, incredibly, is to advance the idea of the United States as the problem in NATO and the aggressor  in Ukraine. Or as Voice of Russia commentator Eva Herman stated in a German language broadcast, “There will be war. Nothing, nothing at all appears to be able to prevent the U.S. Administration from taunting Russia until things explode.”