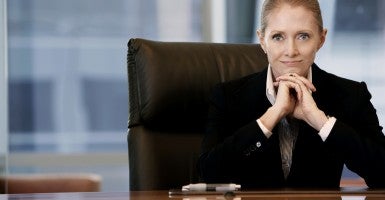 The Census Bureau released updated data this week showing that the so-called “gender pay gap” between men and women reached a record low, with women earning 78 cents for every dollar a man earns.

But does this mean that a woman who performs the exact same job as a man gets paid 22 cents less on the dollar? Of course not. If companies behaved that way, they would face lawsuits. Their profits would also suffer: underpaid women would jump ship to competitors and overpaid men would drive up costs and reduce companies’ competitiveness.

Even within the government pay scale, women make only 89 cents on the dollar compared to men.

The pay gap results from the choices women make. Once factors such as career choice, education and experience, hours and work schedules, and career interruptions are taken into account, the so-called pay gap falls to about 5 cents. Other factors, such as the cost of fringe benefits, likely explain some or all of the remaining gap.

For example, even within the government’s General Schedule pay scale that effectively prohibits pay-based discrimination, women make only 89 cents on the dollar compared to men. Why? Well, women make up 75 percent of all federal social workers but only 17 percent of all federal engineers. However, federal social workers make an average of $79,569, while federal engineers make an average of $117,894.

Attempts to reduce the so-called remaining “pay gap” through legislation such as the Paycheck Fairness Act would unintentionally harm women by forcing one-size-fits all jobs upon employees, thus taking away some of the choices women make, and by potentially subjecting women to increased discrimination in the hiring process.

While it may be true that the average women earns less than the average man, most women don’t measure their worth by the size of their paycheck, but rather their ability to freely pursue their own choices and happiness.