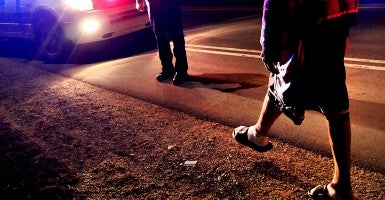 A judge is either on site or on call to rule on probable cause and can issue a warrant for the test. A certified phlebotomist is at the ready, and blood is drawn at the checkpoint.

According to state law, drivers in Mississippi give their “implied consent” to a blood or breath sample if an officer lawfully requests it. A search warrant becomes necessary if a driver refuses, and a first-time refusal results in a 90-day license suspension.

Is this constitutional? The Mississippi Highway Safety Patrol did not return repeated requests for comment.

But Ronald Wright, a law professor and the associate dean for academic affairs at Wake Forest University in Winston-Salem, N.C., said the tactic is not in keeping with the spirit of the Fourth Amendment to the U.S. Constitution and its prohibition against unreasonable search and seizures.

“State statutes might give the police certain authority in a traffic setting that they wouldn’t have in other settings,” Wright said. “One thing that worries me is typically a warrant is based on probable cause. Probable cause, in normal doctrine, cannot be based on refusal to cooperate. We’re allowed to be uncooperative, and police are not supposed to draw any inferences from that.

“To the extent that a judge is issuing a normal warrant and then they’re using the fact someone says no as evidence, I think that’s contrary to traditional Fourth Amendment practice.”

John Bowman, communications director for the National Motorists Association, said the 30 states that perform these checkpoints, are violating drivers’ rights.

“Backers of no-refusal point out that the police secure warrants before the invasive testing, but often the justification for the warrant is flimsy at best,” Bowman said. “And remember, we’re not talking about breath tests here. We’re talking about taking a person’s blood, sometimes against their will. This has the potential to become a gross violation of personal privacy.”