The Scary Amount of Oil Money ISIS Makes Every Day 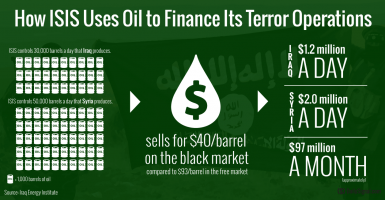 President Obama, laying out his strategy last night to defeat the Islamist jihadists known as ISIS, stressed that “it will take time to eradicate a cancer” such as the terrorist group represents in the Middle East.

One hurdle in the way of Obama’s intention to work with allies to “degrade and ultimately destroy” ISIS (also known as ISIL and the Islamic State) is the brutal organization’s control of oil fields in Iraq and Syria.

>>> Commentary: What Obama Got Right—and Wrong—in His ISIS Speech

According to the Iraq Energy Institute, an independent, nonprofit policy organization focused on Iraq’s energy sector, the army of radical Islamists controls production of 30,000 barrels of oil a day in Iraq and 50,000 barrels in Syria.

By selling the oil on the black market at a discounted price of $40 per barrel (compared to about $93 per barrel in the free market), ISIS takes in $3.2 million a day.

Eric Bolling, a co-host of “The Five” on Fox News, cited these numbers on Tuesday’s show to explain “why we can’t wait” to counter ISIS.

.@EricBolling breaks down the way #ISIS makes its money. WATCH and weigh in. #TheFive https://t.co/yEZYvVMfLi

James Phillips, veteran expert in Middle Eastern affairs at The Heritage Foundation, told The Daily Signal that the revenue gives ISIS a “solid economic base that sustains its continued expansion.”

The oil revenue, which amounts to nearly $100 million each month, allows ISIS to fund its military and terrorist attacks — and to attract more recruits from around the world, including America.

To be successful in counterterrorism efforts, Phillips said,  the U.S. and its allies must “push the Islamic State out of the oil fields it has captured and disrupt its ability to smuggle the oil to foreign markets.”

ISIS sells oil to consumers in territory it controls, roughly the size of Maryland, inside Syria and Iraq. The terrorist group also sells oil to a network of smugglers that developed in the 1990s during Iraqi dictator Saddam Hussein’s rule; that network smuggled oil out of Iraq into Turkey to avoid sanctions imposed by the United Nations.

ISIS also reportedly sells oil, through middlemen, to the Assad regime in Syria that is trying to quell rebellion there. When it comes to making a fast buck, the Middle East has no shortage of “strange bedfellows” willing to do business with each other.

In his speech last night, Obama promised to “redouble” efforts to cut off the Islamic State’s funding.

If the U.S. and its allies are to succeed on that front, Phillips said, they should focus “intently on cutting the oil revenues that make up a large portion of that funding.”