At One Border Hot Spot, Concern That Federal Prosecutors Have Cooled on Security 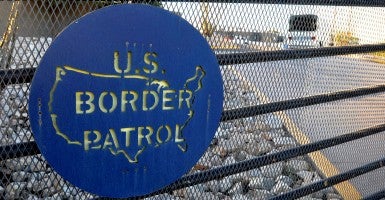 Officials in Yuma County, Ariz., a border region long a hot spot for illegal immigration, say the Department of Justice is scaling back an established program that uses prosecution and imprisonment to discourage illegal border crossings. Sens. John McCain and Jeff Flake, both Republicans, sent the letter to Holder on Monday after the top law enforcement official in Yuma County notified Flake about the changes. Under the shift, prosecutors would focus on high-priority targets such as illegal immigrants who also are convicted criminals.

The new move, directed specifically at the U.S. Border Patrol’s Yuma sector, would put it in line with other areas that don’t follow Yuma’s “no tolerance” policy.

This new guidance is of great concern because it undermines the mission of local law enforcement agencies throughout Yuma County for 100 percent prosecution of those entering the U.S. illegally in order to curb re-entries.

Justice Department officials did not respond to The Daily Signal’s request for comment on the concern that federal prosecutors have ordered enforcement changes in Yuma.

>>> Below: Read Letters from Sheriff Wilmot, Sens. Flake and McCain

In civil immigration courts across the country, deportation cases are handled as violations of the nation’s administrative code. But courts used for the Justice Department’s Operation Streamline treat the act of illegally crossing the border as a federal crime.

The idea is that everybody arrested is prosecuted for illegal entry or re-entry, before earning a conviction and prison time — and then being immediately deported.

David Inserra, an expert on homeland security at The Heritage Foundation, said that under the Immigration and Nationality Act,  those charged with illegally entering the U.S. can get six months behind bars for a first-time entry — a misdemeanor — and a two-year sentence for a re-entry — a felony.

But those prosecuted under Operation Streamline essentially enter plea deals that get them reduced charges and less jail time than they otherwise might receive.

“This encourages a guilty plea because you are receiving a lighter sentence than you otherwise would,” Inserra said, adding:

If the program is scaled back to not prosecute the misdemeanor [first offense], that means they are likely getting a notice to appear in immigration court, and they will likely not show up.

Inserra said those prosecuted through Operation Streamline likely are adult men — not the mothers and children and unaccompanied minors that have defined the recent crisis at the Texas border with Mexico.

Critics of the Operation Streamline say that under such speedy proceedings, border crossers don’t receive a thorough defense.

Until the program began, many who crossed the border illegally were allowed to return home voluntarily if they didn’t have a criminal record or a high number of prior illegal entries.

Shawn Moran, vice president for the National Border Patrol Council, confirmed to The Daily Signal that federal officials recently announced they will move forward with the new prosecution procedures in the Yuma sector. “Before it was 100 percent prosecutions; now you would get a free pass on the first arrest,” Moran said. The union official added:

We think it’s a bad idea. You are taking something that works for that system and changing it. Illegal activity in Yuma was basically locked down in part due to 100 percent prosecution of those who cross illegally.

Moran said the Yuma sector is the “only place” he knows of that had enforced 100 percent prosecution.

In an interview with The Daily Signal, Capt. Eben Bratcher of the Yuma County Sheriff’s Office said the unique policy in the sector had been working.

It’s a done deal from what we’re hearing. When the federal program began here [in 2006] we were one of the worst sectors for illegal activity. The program streamlined one facet of prosecution and showed that there are consequences for crossing illegally. That has taken us from one of the worst to one of the best. We don’t want to do away with the progress we’ve made here.

“We don’t want to do away with the progress we’ve made here,” says Capt. Eben Bratcher of the Yuma County Sheriff’s Office.

In May, the Congressional Research Office detailed the effectiveness of Operation Streamline in deterring illegal immigration.

The agency found that the recidivism rate among migrants deported under Operation Streamline in fiscal year 2012 was 10 percent, compared with 27 percent for migrants who agreed to a voluntary return, thus avoiding prosecution.

In the previous year, recidivism rates of the deportation programs were 12 percent and 29 percent, respectively, according to the analysis.

Wilmot, in his letter, warns that such progress would be blunted without 100 percent prosecution. The sheriff writes:

It is our position, much like other border sheriffs, that without 100 percent prosecution, this administration will continue to see a border that is porous and open to the criminal element entering the United States to prey on this country.