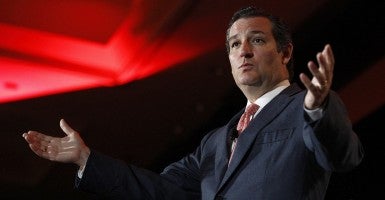 Hours after  the Texas Republican walked off the stage to boos at a conference of Middle Eastern Christians, Sen. Ted Cruz’s office says organizers of the event never told him to avoid talking about Israel or the Jewish people.

“They were made no longer welcome,” says In Defense of Christians president after @SenTedCruz heckling.

“It is crystal clear to anyone who observes Ted Cruz that he stands with Israel,” said Amanda Carpenter, Cruz’s communications director. “If organizers had asked us not to discuss our support of Israel, we would have declined the event.”

Cruz’s keynote address last  night to approximately 900 attendees of the first-ever In Defense of Christians conference was interrupted with heckling and boos moments after he stepped to the podium. Cruz eventually walked off the stage.

Joseph Cella, a senior adviser to In Defense of Christians, confirmed there were no specific instructions for speakers, including Cruz, to shy away from Israel.

“We gave him the following guideline: The theme to stick to is religious freedom and human dignity,” Cella told The Daily Signal. “There were really no guidelines beyond that. We anticipated he would focus on the theme and stick to it.”

When asked if Cruz deviated from that message, Cella said:

We didn’t expect the speech to delve into the matters of relationships of Jewish, Muslim and Christian brothers and sisters over the years. That was certainly a surprise as well as the reaction.

‘United in prayer’ at the IDC conference. (Photo: IDC/Facebook)

At a press conference earlier yesterday, speakers did address the “comity between Jews, Muslims and Christians over centuries.

When I spoke in strong support of Israel and the Jewish people, who are being persecuted and murdered by the same vicious terrorists who are also slaughtering Christians, many Christians in the audience applauded. But, sadly, a vocal and angry minority of attendees at the conference tried to shout down my expression of solidarity with Israel.

Toufic Baaklini, president of In Defense of Christians, criticized “a few politically motivated opportunists” for dividing the attendees.

Some conference attendees applauded @SenTedCruz, but a “vocal minority” forced him off stage.

“Tonight’s injection of politics when the focus should have been on unity and faith, momentarily played into the hands of a few who do not adhere to IDC’s principles,” Baaklini said of the incident. “They were made no longer welcome.”

One attendee, Mark Tooley, president of the Institute on Religion and Democracy, wrote on his blog, “It’s no secret that many Mideast Christians generally aren’t big fans of Israel.” Tooley also noted, however: “Cruz, a savvy politician, knew the reaction he would provoke from some by commending Israel, and he maximized his political moment before the many cameras.”