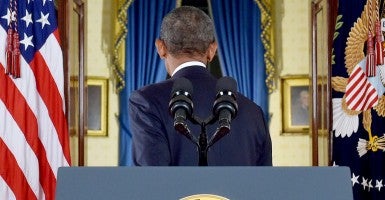 Last night, Obama addressed the nation vowing to “destroy the terrorist group known as ISIL.” The speech, focusing on a four-point counterterrorism plan for Iraq and Syria, was met with mixed reactions.

Here are some highlights from the night’s reactions:

There is nothing about Obama that makes me feel confident on foriegn issues. #obamaspeech

This might be President Obama's best speech yet. #ObamaSpeech

I don't know which America Obama lives in but it sounds a lot better than the one we're in now. #obamaspeech

Finally some strong words!!! : "If you threaten America, you will find no safe haven" #ObamaSpeech

"My highest priority is the security of the American people." Except for the Benghazi Four, our border patrol agents, Marine in Mexico…

ISIS, economy and Ebola all in the same speech #WTF