Q&A: What More Troops in Iraq Means for Defeating ISIS 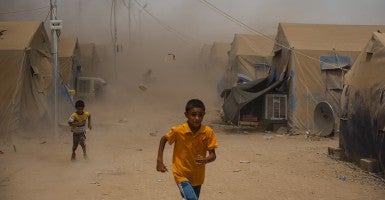 Children run as a sandstorm hits a refugee camp for those who fled the ISIS threat in Mosul, Iraq. (Photo: Martin Alan Smith/Pacific Press/Newscom)

Despite repeated U.S. airstrikes ordered by President Obama to blunt the advance of the Islamic State, the brutal terrorist group — also known as ISIS — continues to slaughter civilians in Iraq and Syria and to vow to inflict the same on the United States.

Last week, the president ordered more than 350 troops to Iraq to toughen security at the U.S. Embassy, bringing the total number of American armed forces to over 1,000. According to the White House, the troops are not there to engage in combat.

After telling reporters Aug. 28  that he didn’t yet have a strategy for combating the Islamic State at its bases in Syria, Obama plans to address the nation tonight to detail a blueprint  to “degrade and ultimately destroy” the terrorist army.

Ahead of the president’s speech, James Phillips, a veteran expert in Middle Eastern affairs at The Heritage Foundation, agreed to answer questions about what the president’s decision to deploy more troops means — and what American strategy against ISIS should look like.

The Daily Signal: President Obama already withdrew our troops from Iraq. Why send more back?

Phillips: The Obama administration unwisely withdrew all U.S. troops from Iraq at the end of 2011, while minimizing the risks entailed in that move. The comeback of the al-Qaeda offshoot called the Islamic State of Iraq and Syria, or ISIS, exposed the wishful thinking behind that flawed decision. President Obama has belatedly ordered some U.S. troops back to Iraq to help protect the U.S. Embassy and diplomatic personnel, gather intelligence on the situation, identify targets for airstrikes and help alleviate a worsening humanitarian crisis.

Q: Will U.S. military personnel be involved in combat? If not, why?

A: U.S. troops potentially could be involved in combat if they are attacked by ISIS or other hostile groups, but the administration has ruled out deploying combat troops on the ground inside Iraq.  U.S. personnel deployed so far technically have been assigned as advisers and intelligence-gathering personnel.

The troops most likely to see combat are Army special operations forces assigned to units of the Iraqi army and Kurdish militia forces who act as spotters to help direct U.S. airstrikes.  U.S. warplanes and armed drones already have been involved in launching airstrikes, which will be the principal military operations conducted by U.S. forces in Iraq.  The air campaign is likely to escalate in intensity very shortly, along with possible cruise missile strikes launched by U.S. naval forces in the Persian Gulf and eastern Mediterranean Sea.

Q: The White House says the troops will protect our diplomatic facilities and personnel. Isn’t there already diplomatic security? Why add more?

A: The administration prudently is beefing up security for diplomatic personnel at the U.S. Embassy in Baghdad and elsewhere, after being caught off-guard by the rapid advance of the ISIS offensive.  ISIS also has a long-established covert presence in Baghdad and other cities where they have conducted an intensifying terrorist campaign using car bombs, suicide bombers and commando attacks.  The White House belatedly has realized that President Obama’s glib dismissal of ISIS as a “J.V. [junior varsity] team” of terrorists back in January was a huge mistake.

Q: How should U.S. troops stationed at embassies and bases respond to mounting attacks in areas near them? Are they allowed to engage in combat?

A: The troops are allowed to take action to defend themselves and other U.S. personnel from attack, but in general will try to avoid ground combat.  The U.S. should mount most of its military efforts from the air, not the ground.

Q: Do you think this is the first step toward putting combat boots on the ground again in Iraq to combat the Islamic State?

A: I think the Obama administration wants to avoid putting U.S. combat troops on the ground.  But it is likely that at least some of the special operations forces already deployed in Iraq will be drawn into the fighting if the Iraqi units they are advising are attacked.

Q: Given recent developments in Iraq and the beheadings of two American journalists, what should President Obama’s strategy be in combating ISIS?

A: The president needs to recognize that his strategy of “leading from behind” has yielded disastrous results that have left U.S. interests behind, not only in Iraq, but in Libya and Syria as well.  He must develop a coherent political, military and diplomatic strategy in close cooperation with the Iraqi government, the Kurdistan regional government and other allies to destroy ISIS.

This should entail major U.S. airstrikes on ISIS leadership, military bases and fighters that are closely coordinated with Iraqi military forces on the ground; intensive intelligence and law enforcement cooperation to reduce the flow of foreign fighters joining ISIS in Iraq and Syria; political efforts by the Iraqi government to reach out to moderate Sunni political and tribal leaders to siphon away Sunni Arab support for ISIS; international efforts to cut the flow of smuggled oil and gasoline, as well as private donations that help fund ISIS.

A: The administration unfortunately has sent mixed messages that have confused and discouraged U.S. allies as well as potential allies inside Iraq.  President Obama has an opportunity to clearly articulate U.S. policy in his speech tonight.

Let’s hope that he finally has developed a strategy for a crisis that has been brewing at least since January.

For more of James Phillips’ insight and analysis on ISIS and Iraq: