Genetic Engineering Could Provide the Solution to Florida’s Citrus Problem 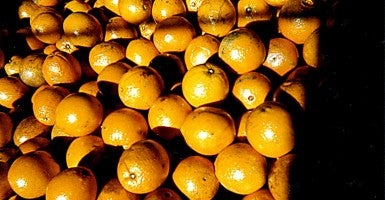 Biotechnology once again could play an important role in helping to address a major problem affecting agriculture.

The $9 billion Florida citrus industry is being threatened by a disease believed to have originated in China known as huanglongbing, commonly referred to as citrus greening. The bacteria that causes the disease is carried by an Asian citrus psyllid, a small insect that packs a large, deadly punch for citrus trees.

Once the insect feeds on the tree, it’s the beginning of the end for the tree. An infected citrus tree may continue to produce fruit for a time, but it eventually will die from the infection. There’s no cure for citrus greening, and no country has eradicated it. Needless to say, many citrus growers and producers in Florida, particularly those in the orange industry because oranges have been the most affected, are very concerned about their industry.

Although not at the same level, this incident evokes a little “fruit déjà vu.” In Hawaii, starting in the 1940s, the papaya plant was being ravaged by disease. The Hawaii Papaya Industry Association (HPIA) tells the story:

The Hawaii papaya industry began suffering severe economic losses due to the impact of the devastating papaya ringspot virus on the island of Oahu as early as the 1950s. Papaya production then moved to the Puna area of the Big Island in the 1960s, but, by 1997, the virus had almost destroyed the papaya industry. Production of Hawaii’s fifth largest crop fell by nearly 40 percent, farmers were going out of business, and Hawaii’s once $17 million papaya industry was struggling to survive.

A solution was needed in order to save the papaya industry. Luckily, since at least the mid-1980’s, researchers were trying develop a papaya plant that was resistant to the ringspot virus.

In 1998, the genetically modified “Rainbow papaya” became available to farmers in an attempt to solve the problem. Success was immediate. As HPIA explains, “[T]he Rainbow papaya produced immediate results. Within four years, the genetic improvement had not only stopped the rapid decline of the Hawaii papaya industry, but production actually returned to levels near where they were before the papaya ringspot virus invasion.”

This brief video found on the GMO Answers website tells the story of how genetic engineering helped the papaya overcome the virus:

Modern advances in science could help address the problems in Florida, as it did in Hawaii. Other potential solutions should be pursued, but biotechnology should be included in the arsenal. Not surprisingly, efforts have been under way to find a solution through genetic engineering, and it is quite possible the Sunshine State’s signature commodity could be salvaged through such innovation.