Another Day in Immigration Court: 71 Juvenile Cases and a Judge ‘Just Trying to Make You Smile’ 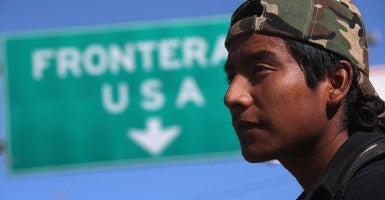 “You get one day in school and another one out; that’s a pretty good deal,” Bryant says to one boy, who missed class at T.C. Williams High School in Alexandria, Va., for this master hearing—his first appearance at Arlington Immigration Court.

“Were the kids cool?”

The immigration court backlog shows no signs of easing, so one judge keeps it fun.

“Si,” the boy nods in Spanish.

Late last month, The Daily Signal sat in on a morning in Bryant’s Courtroom 6, a day when the gregarious judge heard 38 juvenile cases—all master hearings, preliminary affairs that take place before any rulings are made.

A lawyer representing a child that day said it likely will be two years from the first appearance until the child faces his individual hearing, when the judge will rule on the youth’s status.

Yesterday, Bryant saw 71 juvenile cases in a small and cramped courtroom. It was so busy, the judge required the service of a security guard to monitor traffic and keep people out in the hallway until their name was called. The master hearings, which occur most Tuesday and Wednesdays in Arlington Immigration Court, were typical of any other here, where Bryant eases the children with jokes and happy birthday shout-outs, delivers listings of free legal services and asylum packets, and schedules the next court appearance—set for months from now.

Most of the children appearing in court—there with family and without a lawyer—were given a new court date of Jan. 21, when the juvenile and (possibly) his lawyer will present a formal asylum package.

The children will be in the United States longer than that.

A Pew Research Center report released Wednesday shows that though the number of people living in the United States illegally last year was steady at 11.3 million, the illegal population now has been in the country much longer than in previous years.

In 2013, the typical illegal resident had been living in the United States for 12.7 years, Pew found, up from a median of less than eight years a decade earlier.

There is a backlog of more than 375,000 pending cases in U.S. immigration courts.

Also on Wednesday, the Department of Homeland Security reported the number of immigrant children caught alone illegally crossing the Mexican border into the United States—the demographic represented in Bryant’s Arlington courtroom—continued to decline in August.

Still, federal immigration courts have a backlog of more than 375,000 pending cases.

Some 3,000 of those are being heard at Arlington Immigration Court, Bryant said.

So if the two parties—the immigrant children and Bryant—will continue to have dates together into the foreseeable future, why not make the experience pleasant?

One boy facing his master hearing Wednesday will celebrate his birthday September 12.

Bryant got the festivities rolling early.

“On the count of three, everyone shout out, ‘Happy birthday, Jacob,’” Bryant commanded the courtroom.

There are 11.3 million illegal immigrants living in the United States.

“You will never forget this birthday, Jacob,” Bryant says, before giving the boy his new Jan. 21 court date, ensuring Jacob will celebrate his birthday in the United States.

Another boy, a 10-year-old whom Bryant declares “the winner” because he is unofficially the youngest of the cases heard Wednesday, traveled to Arlington with his mom from Blacksburg, Va., home of Virginia Tech University.

“That’s where you’re going to go to school in a couple of years, right?” Bryant teases the child. “Just like my son.”

Bryant then tries to talk Virginia Tech football with the 10-year-old, noting that the Hokies “played very well this weekend.”

The boy and his guardian grin without a retort.