During Obama’s Presidency, National Debt Has Grown by $61K Per Household 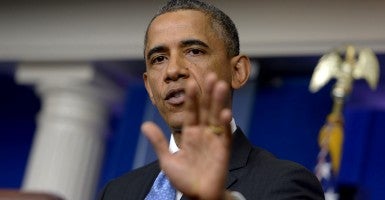 You may have heard pundits time and time again dismiss America’s debt problem, touting that the deficit has fallen by 50 percent since 2009.

Yet that sidesteps the real issue: the massive amount of debt the country has taken on in the past six years has put the nation in a vulnerable position as entitlement spending is set to take off and big-spending policies continue to pile on debt. Indeed, the United States has added $7.06 trillion of debt since President Obama took office—far more than under any previous president.

This is bad news for tomorrow’s Americans who could face slower economic growth and higher taxes as America’s mounting debt continues to climb and outpace growth of the economy. No, that’s not a typo. (Photo: Getty Images)

If that’s not alarming, take a look at how this debt stacks up:

Need a new ride? Obama and Congress could have bought each American household a Mercedes Benz E-Class sedan (MSRP $51,400-$61,400) with the debt accumulated during Obama’s presidency.

Perhaps that could have worked out better than the $3 billion that was squandered on the failed “Cash for Clunkers” program.

The debt increase seen over the past six years is massive enough to eclipse the entire annual production of other top economies around the world. The $7.06 trillion added during Obama’s tenure exceeds the combined 2013 output of Germany and France, the two largest economies in Europe.

It is also roughly equal to the combined 2013 GDP of Japan and Brazil, the third and seventh largest producers in the world, respectively.

Cristiano Renaldo, the highest-paid soccer player in the world, made $80 million last year. In order for him to pay off the debt accrued during Obama’s presidency, he would have to play soccer for 88,250 years. To work off the total U.S. debt, Renaldo would have to spend an astounding 220,000 years on the pitch.

But how hard would the richest of the rich need to work to run up this kind of tab? With an estimated fortune of $79.1 billion, Bill Gates is the currently the wealthiest person in the United States. ‘To pay off the entire national debt, we’d need more than 220 Bill Gateses willing to fork over their net wealth to the U.S treasury.’ (Photo: Newscom)

However, he would need to donate his entire fortune more than 89 times over to pay off the debt incurred since Obama took office. To pay off the entire national debt, we’d need more than 220 Bill Gateses willing to fork over their net wealth to the U.S treasury.

Unfortunately, this could only be the beginning. If you think the $7 trillion under Obama’s watch—or the national debt of $17.6 trillion—is excessive, compare that to Medicare’s (part A) and Social Security’s unfunded obligations  over the next 75 years, which  currently totals $49 trillion. Take that in — $49 trillion in unfunded obligations over the next 75 years. Whoa. (Photo: Christopher Furlong/Getty Images)

That’s almost three times the size of today’s national debt . That is $49 trillion the country will not have to pay the benefits it is expected to give out under current law.

This massive growth of debt is troubling, and shows little sign of slowing down. The Congressional Budget Office predicts that deficits will return to near trillion-dollar levels in the next 10 years and expects another $7.2 trillion to be added to the debt by 2024. Unfortunately, the $17.6 trillion debt could only be the beginning — and it falls on the American people. (Photo: Newscom)

In order to reverse this trend, the country needs to seriously address its spending problem, starting with an evaluation of its biggest culprit: swelling entitlement programs. Continuing to put off the problem will leave the next generation more indebted and economically weak than any before it—and that is not the American way.