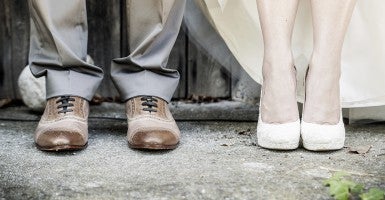 Does the U.S. Constitution require the states to redefine marriage? Earlier today a federal judge said no. Judge Martin L.C. Feldman upheld Louisiana’s constitutional authority to define marriage as the union of a man and a woman—as 78 percent of Louisiana voters did in 2004.

Feldman noted that Louisiana’s marriage law furthers two important interests: “linking children to an intact family formed by their biological parents, as specifically underscored by Justice Kennedy in Windsor” and “safeguarding that fundamental social change … is better cultivated through democratic consensus.” That is, Feldman noted the two central issues in this debate—the policy question: What is marriage, and the legal question: Who gets to define marriage.

Feldman ruled that, consistent with the U.S. Constitution, citizens and their elected officials should get to define marriage, and they can define it as the union of man and woman if they choose to. In response to those who argue that there is no rational basis for such marriage laws, Feldman writes: “The Court is persuaded that a meaning of what is marriage that has endured in history for thousands of years, and prevails in a majority of states today, is not universally irrational.”

Feldman cites the Supreme Court’s decision in the federal Defense of Marriage Act (DOMA) case, U.S. v. Windsor, as support that Louisiana has the right to define marriage for itself. Feldman writes: “Windsor repeatedly and emphatically reaffirmed the longstanding principle that the authority to regulate the subject of domestic relations belongs to the states, subject to indistinct future constitutional guarantees that in Windsor were, by its expressed limits, left open and rather inexact.”

When the Supreme Court struck down part of DOMA, Justice Anthony Kennedy explained, “The significance of state responsibilities for the definition and regulation of marriage dates to the Nation’s beginning.” Taking Kennedy at his word, Feldman emphasizes the basic equality of state citizens and the vital importance of democratic debate. Just as citizens are free to redefine marriage to include same-sex relationships, so too are citizens free to retain the historic definition of marriage as the union of a man and a woman—as citizens in a majority of states have done.

Our federal Constitution is silent on what marriage is. Judges should not insert their own policy preferences about marriage and declare them to be required by the Constitution. As Feldman notes, “it is not for this Court to resolve the wisdom of same-sex marriage.The nation is witness to a strong conversation about what is marriage.” The courts should uphold the freedom of the American people and their elected representatives to make marriage policy.

Feldman accepts that Louisiana’s voters had a rational basis to define marriage as the union of a man and woman:

Louisiana’s laws and Constitution are directly related to achieving marriage’s historically preeminent purpose of linking children to their biological parents.  Louisiana’s regime pays respect to the democratic process; to vigorous debate….The fact that marriage has many differing, even perhaps unproved dimensions, does not render Louisiana’s decision irrational.

Feldman rightly questions where the re-definition of marriage will lead:

Must the states permit or recognize a marriage between an aunt and niece? Aunt and nephew? Brother/brother? Father and child? May minors marry? Must marriage be limited to only two people? What about a transgender spouse? Is such a union same-gender or male-female? All such unions would undeniably be equally committed to love and caring for one another, just like the plaintiffs.

This again highlights the importance of respecting the authority of citizens and their elected officials to make policy about marriage. As Feldman emphasizes, marriage policy should be worked out by the people in the states: “Federalism is not extinct. Federalism remains a vibrant and essential component of our nation’s constitutional structure.” The debate about marriage cannot be put to rest by a court-imposed 50-state solution. This is the people’s decision.