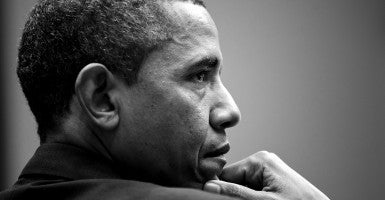 The foreign crises that have challenged the Obama Administration this summer are not the result of a happenstance outbreak of global chaos, but of bad policy choices. From the Middle East to our own border to the Eurasian steppe, President Obama’s “lead from behind” chickens—his wanton abandonment of America’s leadership role—have come home to roost.

Obama, alas, is not alone in spurning American influence and power, or traditional support for world actors like Israeli Prime Minister Benjamin Netanyahu who identify with American values. Standing behind him is an entire philosophical and theoretical framework, born in academia,that guides his actions. In other words, as American Enterprise Institute’s Michael Rubin wrote in Commentary regarding one of the crises, Obama,

“embraced poli­cies widely supported by the academics and diplo­mats never mind that those policies completely mis­understand the realities of international relations. … The culture that has led Obama to fail completely in his assessment of Vladimir Putin isn’t going to end in 2016, when Obama exits the White House.”

Given that the academic problem is pervasive and that Rubin’s right that the culture will not end in 2017, we must look for systematic solutions. One modest but easy step is to cut off funding for Title VI of the Higher Education Act, which subsidizes area studies centers at universities throughout the country. This Heritage has decided to call for, and our rational can be found here.

>>> First Look: Mike Gonzalez’s ‘A Race for the Future: How Conservatives Can Break the Liberal Monopoly on Hispanic Americans’

Title VI is but one way that the tax payer subsidizes academic nuttiness. A much greater source for funding and support comes through the government-guaranteed loan program and through the accreditation system.

The area studies centers themselves are just one part of the problems at the academy, of course. The study of international affairs in general is steeped in an antipathy to American power that has become uber-influential with Obama, the president most beholden to the ideologies of the faculty lounge since Woodrow Wilson.

Sometimes this “blame America first” mentality displays such un-self-awareness that it can border on self-parody, as when Harvard lecturer Samantha Power in 2003 called for “instituting a policy of mea culpa” which would,

“enhance our credibility by showing that American decision-makers do not endorse the sins of their predecessors. When Willie Brandt went down on one knee in the Warsaw ghetto, his ges­ture was gratifying to World War II survivors.”

It’s less funny when you consider, however, that this is exactly the thinking that led six years later to Obama’s maiden “apology tour,” or that as recompense for her abject comparison of America’s actions to Nazi crimes, Power now represents our country as ambassador to the United Nations.

Cutting off funding to the 125 or so area studies at universities across the country won’t solve all this, to be sure, but the centers are themselves particularly egregious. For starters, they were set up in the 1950s and continue to be funded explicitly to meet “national needs.” For a while that worked, but consensus on what constituted national interest broke down in the 1960s.

Since then, the centers have progressively been taken over by what is known as “the left-over left.” The worst offenders have been the Middle East Centers, which in the 1970s came under the baleful influence of Columbia University professor Edward Said. As Martin Kramer wrote in Ivory Towers in 2002, Said “has crippled Middle Eastern studies to this day.”

Dissent from the reigning ideology was systematically stamped out. The discipline became systematically anti-Israel and so embarrassed about asking the right questions as to become blind to the threats we face as a society.

Together with Latin American centers and those from other areas, the centers became the entry points for ideologies inimical to our national interest, while failing to carry out the main task of academic work: truth discovery.

The cost of these centers to the U.S. tax payer is less than $100 million a year– almost a rounding error, we are aware. But federal funding has a powerful multiplier effect, as the universities then use government’s imprimatur to raise private money.

Ending Title VI will not fix the international fix we’re in at the moment. That will take time. But it’s an important first step.