Report: These Five States Have Highest Liability Per Taxpayer 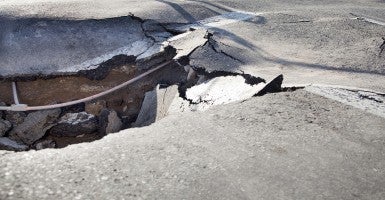 "Sinkhole states" are the states with the largest taxpayer burden. (Photo: Getty Images)

Taxpayers in Alaska who enjoy keeping their money will be happy to see a new report that claims the country’s 49th state is best able to fund its obligations.

Residents of Connecticut may not feel as good.

The Truth in Accounting report ranks the states by “taxpayer burden,” a measure that represents the amount each taxpayer would have to pay his or her state’s treasury to fill its financial hole.

Truth in Accounting, a Chicago-based nonprofit, determined that the states with the highest taxpayer burden — deemed “Sinkhole States” — are, in descending order, Connecticut, Illinois, New Jersey, Massachusetts and Hawaii. The states with the largest “taxpayer surplus” — called “Sunshine States” based on having assets available to pay their bills — are, from the top:  Alaska, North Dakota, Wyoming, Utah and South Dakota.

Taxpayer burden is calculated by determining each taxpayer’s share of state debt after setting aside capital-related debt and assets.  Remaining debt is primarily unpaid pension and retirement health promises.

In its fifth annual report, released this month, Truth in Accounting says states that have unfunded pension liabilities put a burden on future taxpayers, even though “they will not receive any services” from the retired employees who earn those pensions.

States with taxpayer surplus, on the other hand, fund pension costs during the year employees earn the benefits, and the money is set aside for that year.

Connecticut, which the report considers to be in the worst financial shape, has an overall budget shortfall of $61.4 billion, which breaks down to $48,100 per taxpayer.

Truth in Accounting reports that most of Connecticut’s retirement benefits have been promised but not funded.

A Connecticut law requires the legislature to pass a balanced budget. This likely explains why the state chose not to report its entire retirement benefit liability. The report says:

One of the reasons Connecticut is in this precarious financial position is state officials use antiquated budgeting and accounting rules to report Connecticut’s financial condition. Since employee retirement benefits are not immediately payable in cash, the related compensation costs have been ignored when calculating balanced budgets.

Alaska, reported to be in the best financial shape, has an overall budget surplus of $13.5 billion, which breaks down to $46,900 per taxpayer. The report says Alaska has enough money to pay state employees’ retirement benefits and other outstanding bills:

Alaska is in good financial shape because the legislators and governors have only promised citizens and employees what they can afford to deliver.

See how your fared state by reading the Truth in Accounting report.