For This City, Immigrant Surge Proves ‘More Than It Can Handle’ 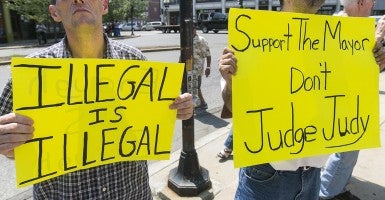 A crowd of about 150 gathered July 22 at Lynn City Hall to voice both concern about and support for illegal immigrants. (Photo: Marilyn Humphries/Newscom)

Just 10 miles north of Boston is Lynn, Mass., an industrial city once was known for its shoe-making. In fact, a colonial boot graces the official city seal.

Lynn’s blue collar base made it a logical place for affordable housing, which has attracted a large immigrant population.

“Lynn has always been an immigrant community and we have always been welcoming to all of the immigrants that call Lynn home,” Mayor Judith Flanagan Kennedy told The Daily Signal.

Last month, though, Kennedy began speaking out against a new strand of immigration: an influx of immigrant children from Central America who settle in her city and — the mayor says — drain its resources.

“I have been called a racist and a hater,” Kennedy said. “That’s not true.”

Kennedy, a Republican, said of her town:

We have never questioned where people come from [or] what their immigration status is. We’ve simply absorbed them and welcomed them into our community. But lately, because of the numbers, we have had to sit up and take notice and ask the [federal] government to help us out.

Late last month, demonstrators stood outside Lynn City Hall to protest comments Kennedy made on television news about the costs attributable to immigrant children, many of them in the United States illegally.

Kennedy told the local Fox affiliate that because of the surge of immigrants, “it’s gotten to the point where the school system is overwhelmed, our Health Department is overwhelmed, the city’s budget is being … altered in order to accommodate all of these [public school] admissions.”

The tension on view in Lynn is similar to that in communities across the country that have become home to unaccompanied immigrant children, here illegally, while they await federal court proceedings.

When an unaccompanied child enters the U.S. illegally and is taken into custody by immigration authorities, federal law requires that the child initially be sheltered by the Department of Health and Human Services.

HHS cares for such children in shelters until it can reunite them with family or other sponsors already living in the United States.

According to HHS data, as of July 31, a total of 989 unaccompanied children had been released to sponsors in Massachusetts.

None of the more than 60,000 Central American minors detained this year has been deported after crossing the Mexican border and into the U.S.

Kennedy spoke at the National Press Club during a Wednesday event sponsored by the Center for Immigration Studies as a way to magnify the Lynn story. Afterward, she had meetings with congressional staffers to talk about federal assistance.

“I’m not really comfortable being the spokesperson, but I will if I have to,” Kennedy told The Daily Signal after the CIS event. “A community as far north as little old Lynn, Mass., is housing more kids than it can handle.”

The second-term mayor said she has had to divert more money this year to the city’s school district, which under federal law must educate any eligible student, regardless of immigration status.

For the 2015 fiscal year, Kennedy said, she had to increase the school department’s budget 9.3 percent and cut all other city budgets between 2 percent and 5 percent. She said:

We have had to hire more [teacher] aides, you have to increase class space and you have to spend a certain amount of money per student. We built a new middle school [to open in 2016] even though Lynn has very little land left to develop.

To compensate for added school costs, the mayor said, the city cut a police program in which officers patrolled neighborhoods on bicycles. The program had decreased gang activity in Lynn, which has had a reputation for high crime rates.

Residential apartment units also are scarce. The city hired more nurses and extended hours at its health clinic to serve an increase in students who require vaccinations.

“These are quality-of-life issues that have been affected,” the mayor said.

Lynn long has had a large Latino population. As of the 2010 census, 32 percent of the total population was Latino, including 6 percent Guatemalans. Incomes tend to be relatively low in Lynn, and 81 percent of students in the school district qualify for free or reduced-price lunch.

It wasn’t until 2012 that Kennedy began seeing a significant increase in unaccompanied children from Guatemala, one of the three Central American countries contributing to the border surge, along with El Salvador and Honduras.

Between September 2012 and June 2013, Lynn Public Schools — the fifth-largest school district in the state — enrolled 56 new ninth-graders from Guatemala. The next school year, that number nearly doubled, to 101.

For the new school year, which begins after Labor Day, only 10 new Guatemalan students are enrolled so far.

Kennedy said she didn’t plan to ask congressional staffers for a specific solution to slow the border surge. The mayor said  it’s not her place to debate federal immigration policies.

But, she said, she is hopeful that federal officials can assist communities such as Lynn in some way, whether it be providing financial aid or setting up a regional school to serve more students.

“I have been called a racist and a hater,” Kennedy said. “That’s not true. I am just looking at the impact on my community.” She added:

Lynn is a very diverse community and I love that it’s diverse. I am not here to speak about broad immigration policy. I am just looking for a more equitable solution from the federal government.