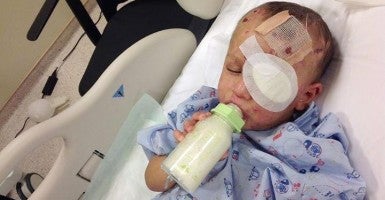 Hasan, 2, was wounded in a suicide bombing after his family escaped an ISIS-besieged town in northern Iraq. (Photo: courtesy Ali al-Bayati)

After escaping a terrorist-besieged Iraqi town with his family, 2-year-old Hasan was wounded when a suicide bomb went off near a mosque.

The blast in the Kurdistan-controlled Kirkuk province, set off by the terrorist group Islamic State, or ISIS, was thought to have killed the boy’s entire immediate family. Today, three weeks later, the toddler remains in the hospital, bandages covering much of his face.

He belongs to a refugee family who left Amerli seeking a safe place after the savage attack of the terrorists to their city. He lost his family, as they were killed in the explosion with many of his relatives as well.

The Aug. 7 incident, which al-Bayati recounted to The Daily Signal by email, is one example of the plight of Shitte Turkmen in Amerli, a city in northern Iraq where they have been under siege for months by the Islamist terrorists.  Al-Bayati later learned that Hasan’s mother survived the terrorist attack.

The Obama administration reportedly is considering a humanitarian relief operation for the Shiite Turkmen in Amerli, similar to the one conducted to help the Yezidi religious minority. That crisis helped push the U.S. back into military action in Iraq.

But today, in a press conference at the White House, Obama downplayed the prospect of new military action against the Islamic State, also known as ISIS or ISIL.

“We don’t have a strategy yet,” Obama said, adding:

Folks are getting a little further ahead of where we’re at. …The suggestions seems to have been we’re about to go full-scale on some elaborate strategy for defeating ISIL and the suggestion has been we’ll start moving forward imminently and somehow with Congress still out of town, they’ll be left in the dark. That’s not going to happen.

James Carafano, a leading authority on national security at The Heritage Foundation, warned against taking too long. He told The Daily Signal:

It is good to be cautious when you are putting lives and our national treasure on the line, but time matters. A fireman that shows up after the fire isn’t much good. Giving ISIS time and space to root itself into Iraq will make it that much harder to kill.

Obama this week authorized U.S. military surveillance flights over Syria, an act that led to speculation that the president soon would pursue airstrikes against the Islamic State’s base of operations in Syria.

Obama, who was to meet with his National Security Council this evening, suggested he would be selective in launching missions similar to the one he authorized to help the Yezidis:

We will continue to focus on [protecting] the American people, and where we can, we will focus on humanitarian acts like the one that saved so many people on a mountain, and we will cobble together a coalition we need for a long-term strategy.

The Turkmen in Amerli are not waiting for U.S. direction, al-Bayati told The Daily Signal. He said 5,000 Turkmen volunteers are fighting the Islamic State jihadists in Amerli.

At least 15,000 civilians, including many women and children, are trapped in Amerli without access to food or water, he said.

The United Nations special representative for Iraq, Nickolay Mladenov, said last weekend that the situation in Amerli “demands immediate action to prevent the possible massacre of its citizens.”

Al-Bayati said city streets are blocked by Islamic State fighters and the only way out is by air. Electricity and water are completely cut off, he said.

Airdrops by the Iraqi military have provided residents with food as well as weapons to help them beat back the Islamic State. However, residents often go 10 days without any airdrops successfully reaching them, he said.

The Islamic State terrorists target Amerli’s residents for persecution because they are part of Iraq’s Shiite Muslim majority.

To secure Amerli, al-Bayati asks that the U.S. contribute airdrops of food and water, as it did for the Yezidis trapped on Mount Sinjar, and conduct airstrikes on Islamic State militants in the area:

We need immediate help for Amerli. We need the U.S. to support Iraqi Turkmen in getting autonomy in their places and international protection, as they are exposed to genocides every few years by extremists.

While Hasan recovers, however, his hometown remains a target of the Islamic State’s advance.

This report has been modified to reflect that Hasan’s mother survived the bombings and to correct the spelling of Hasan’s name.