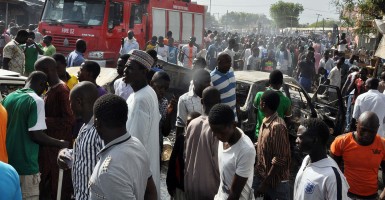 People gather near burnt vehicles as other stand on a fire truck at the site of a bomb explosion that rocked the busiest roundabout near the crowded Monday Market in Maiduguri, Borno State, on July 1, 2014. A truck exploded in a huge fireball killing at least 15 people on July 1 in the northeast Nigerian city of Maiduguri, the latest attack in a city repeatedly hit by Boko Haram Islamists. (Photo: Newscom)

Boko Haram, the terrorist group operating in north-eastern Nigeria and northern Cameroon that drew headlines this spring after kidnapping over 250 female students, aligned itself publicly with the Islamic State in Iraq and Syria (ISIS) in July.

The decision likely has more to do with fundraising than a realignment of goals and ideologies: Boko Haram was never an officially sanctioned al-Qaeda core affiliate. Boko Haram, also known as Jama’atu Ahlis Sunna Lidda’Awati Wal-Jihad, trained and received funding from al-Qaeda in the Islamic Maghreb (AQIM), an al-Qaeda core affiliate based in North Africa.  Even groups such as al-Qaeda in the Arabian Peninsula (AQAP) who are now providing technical support to ISIS have not officially left the al-Qaeda core umbrella.

Whether or not Boko Haram officially allies with al-Qaeda or ISIS remains an important question for how to counter the group, particularly to follow its communications and financing, but it’s not the whole picture.  Boko Haram is a self-serving organization, and will do what it needs to continue to garner support, terrorize innocent civilians and achieve its own goals.

Alarms were raised on Sunday after Boko Haram’s leader released a video declaring Gowza and Damboa, cities in northeastern Nigeria, were a part of an Islamic Caliphate.  Abubakar Shekau, the leader of Boko Haram professed, “We have nothing to do with Nigeria. We don’t believe in this name.” While it remains unclear if Shekau wants his declared Caliphate to form part of al-Baghdadi’s or to create his own rival caliphate, Shekau’s previous statements about Boko Haram’s aims are clear. He has consistently sought to create an Islamic State (or Caliphate) in northern Nigeria to be governed by Sharia (Islamic law).  Shekau’s most recent declaration is in line with Boko Haram’s desired outcome for the region.  Nonetheless, the timing of Shekau’s video is suspect and is likely an attempt to ride on the coattails of al-Baghdadi’s success in Iraq and Syria.

What is most disturbing about the recent events in Nigeria is how Boko Haram is now changing tactics—the group is moving from a hit and run insurgent style strategy to a more traditional military campaign strategy to appropriate and hold territory.  Boko Haram’s evolving strategy ensures protected operating space, additional communities to draw upon for recruitment, and secure supply lines. In many ways is reminiscent of how ISIS rose to prominence in the Levant.  Boko Haram’s capture of Bamboa exhibited sophisticated levels of command and control and the ‘deployment’ of Boko Haram militants.

While the U.S. has fewer strategic interests in northeastern Nigeria than in the heart of the Middle East, Nigeria is now the largest economy in Africa and is of significant geopolitical value to the United States in Africa.  Failing to recognize the threat Boko Haram poses to the region and our interests, and what the evolution of the group means for regional stability could mean a much higher cost for the United States in the near future.

While greater media attention was focused on Boko Haram after Boko Haram kidnapped more than 250 young schoolgirls, the group remains virulent and capable.  The majority of the girls remain missing, and the group continues to kidnap other schoolchildren (boys and girls, Muslims and non-Muslims alike). Labeling Boko Haram as al-Qaeda or ISIS matters little, as long as they continue to wreak havoc, secure territory, and undermine the Nigerian state.