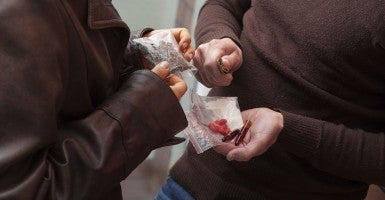 In March, Chris Sourovelis’ son was caught selling $40 of heroin to an undercover police officer.

Officers from the Philadelphia Police Department responded by raiding the Sourovelis’ north Philadelphia home, with guns drawn — one of them pointed at the head of the family dog — and found small amounts of the drug in the 22-year-old’s bedroom. Chris and his wife, Amy, knew nothing of their son’s drug habit and it was the first time he had been busted for possessing narcotics.

A few weeks later, the cops were back to tell the Sourovelis family they had to gather their things and leave the property. The home was being confiscated under civil forfeiture rules, leaving the family homeless and forced to sleep on a neighbor’s couch.

To get their home back, Chris and Amy Sourovelis had to agree that their son would no longer live with them. Even though they agreed, the family could still lose their home permanently as the case winds through the city’s legal system.

Now, the Sourovelis family is one of a group of people bringing a class-action lawsuit against the Philadelphia Police Department and the city’s District Attorney’s Office,alleging that law enforcement in Philadelphia is routinely and repeatedly violating the due process rights of the city’s citizens.

“I did not do anything wrong, yet Philadelphia is trying to take my house,” said Chris Sourovelis in a statement released by the Institute for Justice, a libertarian law firm involved in the case. “If this can happen to me and my family, it can happen to anybody.”

And it does, more often than might be expected.

From 2002 through 2012, law enforcement in Philadelphia seized more than 1,000 homes, 3,200 vehicles and $44 million in cash, according to data obtained by the Institute for Justice through an open records request.

Those assets provided more than $64 million in revenue to the Philadelphia DA’s office, because Pennsylvania law allows local law enforcement to keep the proceeds from forfeited property after it is seized and resold.

Property can be seized by police without requiring a conviction — or even a criminal charge, in some cases — and the proceeds have padded the Philadelphia District Attorney’s bottom line by 20 percent during the past decade.

Attorneys working on the lawsuit say the city has set up a “forfeiture machine” to take advantage of the perverse incentives created by the law.

In a statement provided to the PA Independent,the Philadelphia District Attorney’s Office defended its civil-asset forfeiture policies as part of the city’s overall effort to control the use and distribution of drugs. The office said it uses forfeiture actions against “cars and money that have been used to fuel the drug trade.”

“In all of these efforts, we follow applicable law to protect the rights of all those involved — not only drug deals and those associated with them, but law-abiding citizens who are negatively affected by them,” said Tasha Johnson, communications director for the District Attorney’s Office.

Johnson declined to answer further questions about the lawsuit, as the legal matter is ongoing.

“Allowing law enforcement to keep the proceeds of forfeited property gives them a perverse financial incentive to use civil forfeiture,” said Scott Bullock, senior attorney for the Institute for Justice. “No one in the U.S. should lose their property without being convicted of, or even charged with, any crime.”