Who Was Missing From Acceptance Speeches at the Emmys and VMAs 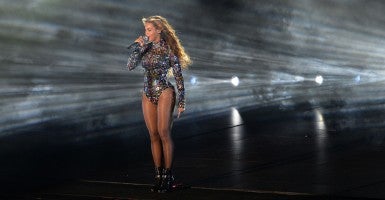 The MTV Video Music Awards and Emmy Awards this week offered pop culture fans a foretaste of awards season, which — say those who notice such things — kicks off in November.

As the winners took the stage and clutched their trophies, they voiced immense gratitude to fans, producers, writers, agents, directors and so on.

Back in the day, it was almost commonplace for acceptance speeches in the televised awards shows to include thanks to God; arguably the practice waned but then was renewed after the terrorist attacks on Sept. 11, 2001, along with thanks to the first-responders and troops.

In an interview with The Daily Signal, Pat Fagan, senior fellow and director of the  Marriage and Religion Research Institute  at the Family Research Council, said it’s a “pattern of human nature” to forget and remember God depending on the circumstance. Fagan said:

Of 17 awards presented Sunday night during the VMAs, nine speeches — including Beyonce’s acceptance of the Michael Jackson Video Vanguard Award — were available for review online.

Only three — Beyonce; rapper Drake, who won for Best Hip Hop Video; and the group Fifth Harmony, who won for Artist to Watch — thanked God in their acceptance speeches. (Drake accepted his award during a concert Monday.)

After husband Jay Z and daughter Blue Ivy presented her with the Video Vanguard Award, Beyonce told the audience:

I have nothing to say, but I’m filled with so much gratitude. I just thank God for this moment.

Monday night at the Emmys, more than 30 awards were handed out to actors, producers, writers and directors across a variety of television genres.

Of the 21 acceptance speeches published online, none contained thanks to God.

Those who do thank God in their speeches often make headlines for doing so.

In March, accepting the Oscar for Best Actor for his role in “Dallas Buyers Club,”  McConaughey began his speech like this:

First off, I want to thank God, because that’s who I look up to. He’s graced my life with opportunities that are not of my hand or any other human hand.

The media pounced, and outlets from The Huffington Post to Fox News wrote about the affirmation.

Two months later, Oklahoma City Thunder’s Kevin Durant accepted the MVP award from the National Basketball Association. Durant wowed fans when he thanked both his mother and God for “changing my life.”

Both McConaughey and Durant also faced criticism for expressing gratitude toward God.

On Twitter, detractors called on McConaughey to stop the “stupid God talk.”  During an interview with ESPN in January, a reporter chuckled as Durant said he thanked God for a standout game.

Fagan, though, said it’s natural for folks of many faiths — or no faith at all — to express gratitude when a blessing occurs:

It has its place after people win something they’ve striven for. They’ve needed the help of other people, and it’s not uncommon to thank God for a blessing. Gratitude for a blessing is known as a natural thing for a man or a woman to do.