‘Taxes Really Do Matter’: Whopper of a Lesson From Burger King’s Move 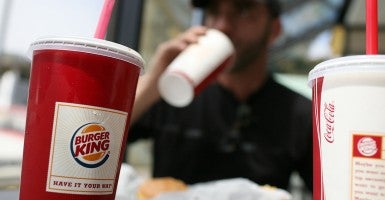 Following Burger King’s example, more companies will aim to move their headquarters to other countries if the United States doesn’t lower — or eliminate — the corporate tax rate, a prominent economist says.

“Taxes really do matter,” Stephen Moore, chief economist at The Heritage Foundation, said at the Bloggers Briefing held at the think tank, adding: “Why not get rid of the corporate income tax rate? … That would be the patriotic thing to do.”

The deal would merge America’s second-largest hamburger chain, valued at nearly $10 billion, with a Canadian company worth more than $8 billion.

Under the deal, Burger King insisted later today it does not plan to relocate to Canada, where corporate taxes are significantly lower.

“This is not a tax-driven deal. It is fundamentally about growth and creating value through accelerated expansion,” Executive Chairman Alex Behring said on a media call.

>>> No Fooling: U.S. Has Highest Corporate Tax Rate in World

“It’s not being driven by tax rates,” Behring said of the merger.

Speaking to bloggers and other communicators at Heritage today, Moore made a connection between the burger chain’s plans and his latest book, “An Inquiry into the Nature and Causes of the Wealth of States: How Taxes, Energy, and Worker Freedom Change Everything.”

The book makes the case taxes really do matter. Burger King is the tip of the iceberg [to show that this is true]. You will see more of these so-called inversions in the next few years because of the U.S. ‘Head Start’ policy that makes other countries [with lower tax rates] more attractive to do business.

The nation’s effective corporate tax rate, combining national, state and local rates, is nearly 40 percent—the highest across all 34 countries that belong to the Organization for Economic Cooperation and Development.

Canada’s rate is just above 26 percent.

If Burger King were to move, it would not be unusual. More than 70 U.S. companies have reincorporated abroad for tax reasons since the early 1980, according to data from the Congressional Research Service, and more than half of those so-called inversions occurred since 2003.

Moore says it might take drastic action for the trend to change:

Why not get rid of the corporate income tax rate? You could still tax shareholders for those profits. That would be the patriotic thing to do. Provide incentives for companies to stay here and foreign businesses to come here.

>>> How Smarter Policies Can Transform the States

New York Gov. Andrew Cuomo, a Democrat, has made it a priority to rid his state of its reputation as a high-tax state, and has pushed tax cuts for corporations and the wealthy, who invest in job-creating enterprises.

“Some Democratic governors are figuring this stuff out,” Moore said. “You’re seeing a lot of blue states catching on about tax cuts. It’s just not economical. It’s political.”