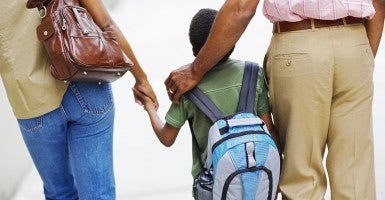 Last Thursday, North Carolina Superior Court Judge Robert Hobgood ruled the state’s school voucher program unconstitutional because the program “appropriates funds in a manner that does not accomplish a public purpose.” The Opportunity Scholarship Program was established last year and set to go into effect this school year, providing children from low-income families scholarships worth up to $4,200 to attend a private school of choice.

The ruling halts implementation of the program and suspends disbursement of scholarship funds.

In February Hobgood granted a preliminary injunction against the program, arguing that the vouchers were “likely” unconstitutional and halting applications to the program. But in May, the North Carolina Supreme Court issued a temporary stay against Hobgood’s ruling.

Hobgood declared the Opportunity Scholarships unconstitutional based on the state’s obligation to provide students a “sound basic education,” finding that the state could not “delegate this responsibility to unregulated private schools…”

The Institute for Justice has filed a motion to intervene in the case to defend the program.

“This decision from the judge was not unexpected, given his willingness to preliminarily enjoin the program last February. The Institute for Justice was successful in getting the North Carolina Supreme Court to stop that injunction and we hope to have similar success in stopping this one,” said IJ senior attorney Richard Komer. “We are moving quickly to try and get the program up and running again. We remain confident that the program is constitutional in all respects.”

“Today’s ruling strikes at the heart of what thousands of North Carolina families have been fighting for over the past several months. With nearly 2,000 already enrolled and more than 300 private schools registered to educate these students, there is no doubt that the families, for whom this program is targeted, desperately desire this program. The Opportunity Scholarship Program is offering parents choices where none have existed before and is leveling the playing field when it comes to our state’s most disadvantaged children.”

Last year, North Carolina launched its first private school choice program, the Education Tax-Credit Program, while also adopting the Opportunity Scholarship Program. By doing so, North Carolina enacted options that could improve the educational landscape in the Tar Heel state for some of the most vulnerable students.

As the school choice march continues across the country, this ruling causes thousands of North Carolina students to wait, their educational futures on hold.