Is Your Bank Supporting Common Core? There’s Now an App That’ll Tell You. 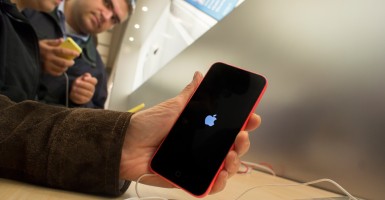 A consumer tries an iPhone 5C in an Apple store in New York. (Photo: Richard B. Levine/Newscom)

Before opening a new bank account, filling up your tank, shopping for groceries, purchasing a computer, booking a flight or visiting a drug store, you can now find out how those companies are spending on political causes.

Thanks to a free online app called 2nd Vote, consumers have this information at their fingertips for America’s most popular brands.

The app, which is available on Google Play and Apple’s iTunes, allows instantaneous access to a database that includes more than 400 companies. It’s the brainchild of a nonprofit based in Nashville, Tenn., which seeks to help consumers make more informed decisions.

“Conservatives need to have this information so they can hold companies accountable,” Chris Walker, executive director of 2ndVote, told The Daily Signal.  “Companies will listen, and listen very quickly and act in a meaningful way if as customers they redirect how their money is spent. The status quo is that conservatives have not engaged on this, so we can’t be surprised when all the corporate activity goes toward the left.”

With a new school year starting in many states this week, 2nd Vote just rolled out an additional feature that allows parents, teachers and other concerned citizens to identify companies that support Common Core national education standards.

Education experts, including The Heritage Foundation’s Lindsey Burke, have argued Common Core is advancing a “top-down” approach to education that empowers federal bureaucrats with the ability to dictate standards while marginalizing the role of parents, teachers and taxpayers at the local level.

There is also a growing body of evidence that suggests Common Core’s instructional methods and learning techniques are less than effective. A study from the Pioneer Institute, for example, found that Common Core’s mathematics curriculum left American students two grade levels behind their international counterparts.

“What we want to do is connect the dots for conservatives in terms of how their money is being spent and to show which companies are promoting something they don’t support,” Walker said, adding:

Education was a natural next step for us and that’s why we decided to take a look at Common Core. We want high standards, but local control is better. We are in global economy and have a lot of competition from companies that are trying to beat us so we need high standards. But when you federalize and centralize education, you diminish the importance of the 50 states as laboratories. This is where the best ideas come from.

2nd Vote, which launched last October, is built around a team of “old campaign opposition researchers” who pour through tax filings, public statements and financial records of political contributions as a way of tracking corporate activity, Walker explained.

Companies are then ranked on a scale of one to five, with one being the most liberal and five being the most conservative. 2nd Vote describes each of the ranked positions as follows:

Walker sees an opportunity for conservatives to break through on education policy. There’s a certain “inconsistency” in the corporate position that could be exploited, he suggests.

Bank of America, for example, belongs to the Business Roundtable, which supports both Common Core and school choice initiatives. Bank of America also donates to the Center for American Progress, which issued a report in favor of Common Core standards and described school vouchers as a “weapon” conservatives are using to destroy the public school system.

“What we want to do is connect the dots for conservatives,” says 2nd Vote’s creator.

“These positions are in conflict,” Walker said.

Bank of America spokesman T.J. Crawford denied the bank had taken a position on Common Core when reached by The Daily Signal.

We want to provide information and help people to make informed decisions and to have it be profitable for companies to be engaged with conservatives. We want to provide a positive incentive not a negative force. By operating together in large numbers, and using the app, we can affect meaningful changes and help our ideas get the attention they deserve.