Why Is It So Hard for Employers to Fill These Jobs? 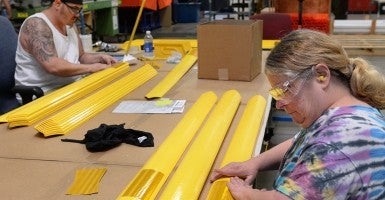 America has a deficit of workers. Willing workers. Capable workers. Skilled, or at least semi-skilled workers, who can do a job and do it well. There are at least one million jobs that go begging day after day if only employers could find workers to fill them.

This probably seems hard-to-believe. After all, how can America have a worker shortage when we have about 18 million Americans who are unemployed or underemployed? When the real unemployment rate is 12 percent?

Well certainly the economy isn’t creating nearly as many jobs as it should – in large part because of regulatory and tax restraints on hiring workers. Obamacare’s anti-employment impact, including the rule that caps employment at 50 workers or less at many firms to avoid the law’s higher costs, is just one example of a law that adds to unemployment lines.

But there are also millions of unemployed Americans who don’t have the skill sets to match what employers are in need of. To make matters worse, a lot of these frustrated job searchers have college degrees that are about as marketable as the paper diploma they are written on.

So what kind of jobs are going unfilled?

* Manufacturing – We always hear we are losing good manufacturing jobs in America and those bedrock middle class jobs aren’t coming back. Gregory Baise, the president of the Illinois Manufacturing Association, tells me that there are “some 500,000 jobs we can’t fill. It’s the biggest problem our industry faces.”. The industry needs welders, pipefitters, electricians, engineers. It needs people skilled in robotics and basic engineering.

* Trucking – At any time over the last several years there have been about 30,000 too few truckers to run long haul routes. The American Trucking Association tells me the number could be closer to 50,000. This is admittedly a tough and high-stress job with lots of time away from friends and family. But they are jobs that pay $50,000 and up, and a lot more than that with overtime.

* Energy – Bloomberg reports that “Gulf Coast oil, gas and chemical companies will have to find 36,000 new qualified workers” by 2016. Many energy towns have unemployment rates of less tha 3 percent – in other words, there’s a worker shortage.

Bob Funk, CEO of Express Employment Professionals, one of the nation’s largest temporary employment agencies located in Oklahoma City, places more Americans into jobs than just about anyone. With nearly half-a million hires a year he tells me, he can find a job for “any American with a strong work ethic and can pass a drug test.” He also estimates that the worker shortage – those with skills to fill available jobs – “is at least one million and probably higher than that.”

Why is it so hard to fill these jobs?

One reason is the curse of the so-called “skills mismatch.” American workers with high school or even college degrees just aren’t technically qualified to do the jobs that are open. This is a stunning indictment of our school system at all levels considering that all in parents and taxpayers often invest as much as $200,000 or more in a child’s education. We’re not turning our kids into competent workers.

Some governors like Mike Pence of Indiana have moved to make vocational education more standard in the Hoosier State. It’s a great idea and it’s a start.

But this won’t solve the whole problem because many companies are already willing to offer 3 to 6 months on the job training for trucking and manufacturing jobs. They will teach them men and women how to operate the machinery, the computers, and the scientific equipment. These aren’t sweatshop jobs.

Mr. Funk cites figures that more than half of the applicants for these kinds of jobs in the temporary job market can’t pass a drug test. “They are unemployable in that case,” he says regretfully.

Then there is the issue that these jobs don’t get filled because the work lacks glitz and glamour.

Too many Americans have come to view blue collar jobs or skilled artisan jobs as beneath them.

Contributing to this attitude is the wide availability of unemployment insurance, food stamps, mortgage bailout funds and other welfare. Taking these taxpayer handouts is somehow seen as normal and a first, not a last resort. One owner of a major trucking company told me last year, “drivers who get laid off don’t come back until their unemployment benefits run out.” This is documented by research from my colleagues at the Heritage Foundation who have found that “4 million Americans laid off in the recession faced effective marginal tax rates near or above 100 percent [because of welfare benefits], significantly reducing their attachment to the labor market.”

There’s no doubt America needs millions of more jobs. But we could put one million more people in jobs tomorrow if we get schools to train our kids with core competencies and if we could instill in Americans an old-fashioned work ethic. The only dead-end job is no job at all.