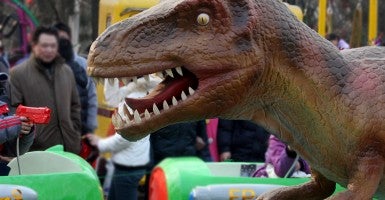 Dinosaurs may be extinct, but absurdity in public schools isn’t.

Alex Stone is a 16 year-old student in Summerville High School in South Carolina. On the first day of class, his teacher asked the students to write a few sentences about themselves and then follow up with a statement in the form of a Facebook status. Alex decided to use this opportunity to make a joke, and wrote “I killed my neighbor’s pet dinosaur.” For the status part, he said he wrote: “I bought the gun to take care of the business.”

The teacher, seeing the words “gun” and “take care of business” immediately notified the police to investigate the death of the fictional dinosaur and see if the teen boy had indeed carried a weapon into school.

The police searched Alex’s locker and belongings, but did not discover any evidence that he brought a weapon into school. Apparently, the high-powered weapons needed to kill imaginary dinosaurs do not easily fit in school lockers.

Alex’s mother, Karen Gray, pointed out the irrationality of the incident: “I mean first of all we don’t have dinosaurs anymore. Second of all, he’s not even old enough to buy a gun.”

The Summerville police arrested him anyway and justified it by saying that he acted “irate” when they confronted him about the comment he wrote. According to Capt. Jon Rogers of the Summerville police, “[t]he charges do not stem from anything involving a dinosaur or writing assignment, but the student’s conduct.” Interesting. The police have added a First Amendment violation to whatever claims Alex already had.

As a result of the arrest, Alex was suspended from school for the rest of week.

David Aylor, the attorney representing Alex, argues the arrest was “completely absurd,” and is “perfect example of ‘political correctness’ that has exceeded the boundaries of common sense.” Alex and his attorney are seeking to overturn the suspension and seek all appropriate legal remedies as a result of this arrest.
This is not the first time a school has suspended a student for playing with pretend weapons.

Nathan Entingh, a ten-year-old boy from Columbus, Ohio, was suspended for three days for pointing his fingers in the shape of a gun. In Baltimore, Md., Josh Welch, a seven year-old student, was suspended for two days after nibbling his strawberry-filled pastry into a gun-like shape, then saying “bang, bang.”

These types of stories make for sensational headlines but there is a very real problem underlying the heavy-handed approach to zero tolerance in schools. Time and again, the response to student “misbehavior” in class has been to involve the police and make arrests, no matter how absurd the charges are. Kids misbehave, especially teenagers, but a student who wrote about killing a fictional creature should not have a criminal record because of it.

The current charges against Alex Stone highlight the reflexive response to treat every incident in school as a criminal behavior. More information may come to light about the circumstances regarding Alex’s arrest, but the police should not have arrested him simply for being irate that a police officer was giving him a hard time about a creative writing assignment. Unless his words and conduct amounted to a true threat, this incident could have been handled by contacting Alex’s parents without unnecessarily involving the police. And it should have.

For his part, Alex has reflected on what happened during the first day of school, stating, “I regret it because they put it on my record, but I don’t see the harm in it. I think there might have been a better way of putting it, but I think me writing like that, it shouldn’t matter unless I put it out towards a person.”

Maybe next time the kids in Summerville High School should stick to writing about Barney the Dinosaur instead of Jurassic Park. Anything less is apparently probable cause for arrest.