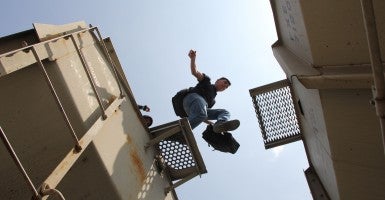 A youth from Central America jumps between cars of the cargo train called "The Beast" on the way to the Mexico-U.S.border. (Photo: Elizabeth Ruiz/Newscom)

“It is my favorite docket, the juveniles,” Immigration Judge John Milo Bryant says, unprompted, as he hears the case of 15-year-old Christian Hernandez, a recent illegal arrival from Honduras.

Christian, a good-looking youth who flashes a sure smile, keeps his hair gelled into a Mohawk and wears a button-up shirt and slacks fastened by a gray Nike belt, tells Bryant he will begin high school in a few weeks.

At this first immigration hearing for Christian — called a master hearing — a lawyer representing the youth concedes the charges against his client and tells the judge he intends to file for asylum.

Bryant promptly gives Christian a new court date, March 4, when the two will see each other again and the boy and his lawyer will present a formal asylum package.

His lawyer says it likely will be two years until Christian faces his individual hearing, when the judge will rule on the youth’s status.

“It’s a wild and wonderful time,” Bryant advises the youth about his upcoming entrance to a Richmond, Va. high school. “Learn a lot. When you come back, give me a status report about how things are going.”

‘See You in a Few Years’

This exchange between juvenile and judge characterizes the rapid-fire proceedings that occur most Tuesday mornings and Wednesday afternoons in Arlington Immigration Court.

The Daily Signal sat in on Bryant’s Courtroom 6 the morning of Tuesday, Aug. 19.

Bryant, who has a juris doctorate degree from George Mason University School of Law, has been an immigration judge since 1987. He previously was a lawyer for the U.S. International Trade Commission in Washington, D.C.

Most of the children in Bryant’s Courtroom 6, unlike Christian Hernandez, appear before the judge in the small corner courtroom without a lawyer.

Some bring family — a parent, or even a brother-in-law — who they’ve been living with since being released from shelters run by the U.S. Department of Health and Human Services.

One tall 17-year-old boy, with his lawyer, submits an application for asylum.

>>> Most in Surge of Child Border Crossers Aren’t Leaving

Bryant gives him a new court date, when a decision will be rendered on the application, for April 2017.

“I’ll see you in a few years,” Bryant tells the youth.

“I’ll see you in a few years,” Judge Bryant tells the teen-ager.

A Spanish translator sitting in Courtroom 6 deciphers Bryant’s English and communicates his words to the teen through headphones.

Another boy has come to his hearing wearing a green medal around his neck — a symbol of his success so far in America.

“Another soccer star?” Bryant asks as the boy walks to his seat in front of the judge.

“No, a scholastic star,” the boy’s lawyer replies.

The boy explains in Spanish that he is one of the best performers among his English for Speakers of Other Languages (ESOL) classmates.

“We’re very proud of you,” the judge says, applauding the boy, whose next hearing will be in 2018. “Keep up the good work and stay super-smart.”

‘I Feel Your Pain’

A 2-year-old girl, arms and hands waving wildly from her pink and green dress, also comes before the judge — in her mother’s arms and without a lawyer.

“These are the real juveniles,” Bryant says. “What an amazing 2-year-old little girl.”

Through the translator, her mother told Bryant she drove to the Arlington court from Delaware.

Because her current residence is so far away, though, Bryant cannot judge the girl’s case.

She is dispatched to a court closer to home.

“I know it’s frustrating,” Bryant reassures the mother. “I feel your pain.”

Most of the juveniles who have hearings this day do not come with a lawyer.

When Bryant asks them why not, most say those they tried to hire claimed to be overbooked. The judge directs them to a handout that lists free legal services.

The approach to the bench in an immigration court in El Paso, Texas. (Photo: Kit Johnson/Creative Commons)

Christian Hernandez, the 15-year-old from Honduras, does have an attorney, and he seems calm and organized.

He speaks the best English of the juveniles here today.

He guided a younger brother, Carlos Manuel, 12 — who doesn’t have a hearing this day — during their journey to America.

Christian arrived with Carlos in McAllen, Texas, on Jan. 29, fleeing threats of “persecution” back home in Puerto Cortes.

His pride in his homeland is evident. He wears a white wristband with “Honduras” written in blue print.

Christian had been living with his grandmother in their home country, but her recent death prompted him and his brother to leave for the U.S., where his parents have lived for most of his childhood.

“The trip was difficult,” the 15-year-old tells The Daily Signal. “I faced worries and desperation.”

After giving himself up to a Border Patrol officer and then being processed, he was transferred to a HHS shelter in Houston.

From there, his journey became circuitous.

Christian spent eight days in Houston before being transferred to a Miami shelter for a week.

He was taken from Miami to an Atlanta shelter and then flown to the Washington, D.C., area, where he was reunited with his parents.

Christian hadn’t seen his mother in seven years, his father in 10. They were living in Richmond, Va.

“It was very emotional,” recalls his father, Melvin, who works in construction. “It’s been 10 years.”

Juan Macias Chavez, 18, from Guatemala, took an unaccompanied journey to the U.S. in December 2012 to escape “bad people.”

Upon arriving in McAllen, he was transferred to Youth for Tomorrow, a shelter in Bristow, Va., founded by former Washington Redskins football coach Joe Gibbs.

In an interview after his hearing, Chavez speaks highly of Youth for Tomorrow, which The Daily Signal profiled last week.

“I like that place,” Chavez says. “I got to go skating and eat at Mexican restaurants.”

In February 2013, Chavez reunited with his father, a factory worker who left his son 12 years ago to make a home and work in Newport News, Va. The young man is enrolled in Warwick High School there.

Chavez appears at the hearing — his third before Judge Bryant — with his father.

Chavez says he recently hired a lawyer, who is absent because of a miscommunication. Bryant tells Chavez to return to court with his lawyer on March 11.

A total of 38 juvenile cases were heard in one morning in Arlington Immigration Court. (Photo: Jessie Wardarski/Cronkite News Service/MCT)

Luis Fernando, 18, from El Salvador, also got a continuance; he has not yet obtained a lawyer.

Like most of the children, Luis Fernando, 18, has not obtained a lawyer

Fernando is a large young man with a flat-brimmed Washington Nationals hat who is built to play football — the sport he strives to play at high school in Sterling, Va.

He appears in court with his mother.

His mother, a housekeeper, left her son for the U.S. more than a decade ago.

“There were some problems [at home],” Fernando says in an interview with The Daily Signal, adding:

“It’s too dangerous. Some people there are very crazy. When I finally saw my mom, I hugged her and said, ‘Oh, you’re my mom.’ ”

This is Fernando’s third appearance before the court, and he has yet to file for asylum.

He says he tried to find a lawyer who could help him sort through immigration law, but lawyers he contacts tell him: “I have too many cases. Call back next week.”

Bryant continues Fernando’s hearing. He is to return in just under seven months.