Some Neighbors Are Headed to Ferguson Today. The Reason Will Warm Your Heart. 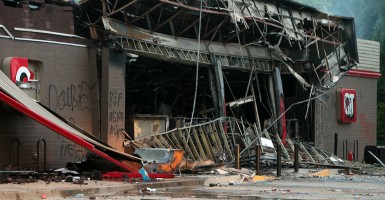 Amid civil unrest in Ferguson, Mo., some St. Louis County residents hope to help the town move toward recovery with a “buycott” in support of looted and damaged businesses.

Led by Bill Hennessy, a resident of Wildwood, Mo., citizens of neighboring towns plan to spend an hour today shopping at affected small businesses in the St. Louis suburb. In an interview with The Daily Signal, Hennessy said:

The goal is to let everyone in the area know that those places are open, and to generate commerce in the area. A lot of them are very small. … The little shops are left on their own.

Many damaged businesses in Ferguson boarded up broken windows and doors but remain open for business. Because many of the storefronts are covered with plywood, some local customers aren’t aware that the shops are open; they may confuse store hours written on the makeshift “windows” with graffiti.

Hennessy, though, hopes the “buycott” will motivate consumers:

Hennessy, a supporter of The Heritage Foundation and its advocacy arm, Heritage Action for America,  said he expects approximately 20 shoppers from St. Louis County to participate in the Ferguson “buycott.”  However, he hopes to see more than 50 attend.

”We want to do what we can to support Ferguson so that it makes a strong comeback,” says @WHennessy

Shoppers are asked to meet on West Florissant Street at 5 p.m. to shop for an hour and visit two to three stores each. The group plans to visit 20 stores altogether, including the Ferguson Bicycle Shop, Whistle Stop Depot and Sportsprint.

Because the situation in the St. Louis suburb remains fluid as protests continue, Hennessy said “buycott” participants will respect the wishes of law enforcement. If police instruct them not to shop, he said, they’ll refrain.

>>> Americans Disapprove of the Media’s Coverage of Ferguson

The Aug. 9 death of Michael Brown, 18, who was shot and killed by Ferguson police officer Darren Wilson, led to protests in the streets followed by nighttime riots and looting. More than 30 local businesses were damaged in the violence. One, a QuikTrip convenience store, burned to the ground.