Where Did ‘Military-Style’ Police Gear in Ferguson Come From? Hint: It’s Not Necessarily the Pentagon 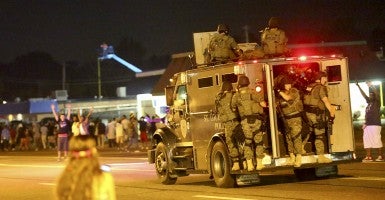 Much of the weaponry and apparel on display during police action to quell riots and looting in Ferguson, Mo., doesn’t look like surplus equipment supplied by the Pentagon but rather hardware purchased elsewhere, a Heritage Foundation expert says.

“The ‘cool guy,’ load-bearing gear is frankly a lot better than we give soldiers,”  Steven Bucci, director of Heritage’s Allison Center for Foreign Policy Studies, told The Daily Signal.

Media accounts focused on equipment rolled out in the St. Louis suburb by local police departments that is less likely to have originated with donations from the Defense Department’s excess-property program, known as “1033,”  than with transactions with private police supply companies or through grants awarded by the Department of Homeland Security, Bucci said.

Looking at the military-style gear that has raised such a furor in the Ferguson situation, there is an interesting point that many have skipped in the rush to condemn the DoD 1033 program. Little of the equipment was likely provided by DoD.

Critics from left and right have decried what they call the  “militarization” or “overmilitarization” of police forces on view in Ferguson since protests first erupted over the Aug. 9 fatal shooting of an 18-year-old black man by one of the town’s white police officers.

Originally begun to assist police departments with drug-enforcement activities, the program expanded in 1996 to include terrorism-related events. After the Sept. 11, 2001, terror attacks, however, the need for police departments to have access to equipment beyond standard-issued gear became more evident.

Images on TV, online and in print have depicted rows of law enforcement officers wearing heavy body armor and accompanied by armored vehicles as they respond to protests, violence and vandalism. Some onlookers argue that police officers look as if they’re in a war zone, not in the streets of a town of 21,000.

During a press briefing Tuesday, Rear Adm. John Kirby,  the Pentagon press secretary, listed equipment that the Ferguson Police Department and other law enforcement agencies in St. Louis County received through the 1033 program since 2007.

It is difficult, however, to identify such firearms and other equipment in the images dominating the media landscape.

Ballistics vests and helmets were not listed among equipment St. Louis County police agencies obtained from the Pentagon program, records show. Reflex sights, which mount on firearms, were on the list.

“We need to take care to find out where this stuff came from,” Bucci said. “There’s little evidence objectionable equipment came from the 1033 program.”

Bucci, a former Army Special Forces officer, said the semi-automatic rifles held by police, likely variations of the AR-15, could have been obtained through the private sector — such as military surplus stores — rather than the Defense Department. Such firearms are not listed among equipment St. Louis County police departments got through the 1033 program.

Because a total of a dozen 5.56 mm rifles were distributed through 1033 across all St. Louis County police agencies, Bucci said, the odds were against them all ending up in Ferguson.

Another image taken in Ferguson shows a rifle mounted  atop an armored vehicle. That type of gun was “not military issue,” Bucci said, and differs from the military’s sniper rifles. An officer aims a mounted rifle Aug. 13 in Ferguson. (Photo: Ymanjoura via Twitter)

In an Aug. 14 article, The Washington Post sought to label and identify “military-style equipment” in photographs of  police taken in Ferguson.

The images and labels point to armor, helmets and goggles; a device that launches flares, smoke bombs, tear gas or grenades; a KA-BAR-style fighting knife and a Gerber knife; a long-range acoustic device; armored tactical vehicles; a Leupold long-range scope; an AR-15 marksman rifle; and a Manfrotto tripod. (Report continues below images.) That equipment was not listed among arms and gear obtained through the 1033 program, according to Kirby’s report.

Any tear gas launcher must have been purchased from a private supplier, Bucci said, because American soldiers are not authorized to use tear gas under the Chemical Weapons Convention. Troops must receive permission from the commander in chief before using tear gas, and only special operations forces currently are authorized to do so.

”Bottom line is that this was a misuse of gear. But it was not, for the most part, gear obtained from the DoD,” says @SBucci

The military-style equipment in the arsenal of local police forces should be wheeled out only in specific instances, Bucci said. Crowd control — as in Ferguson — is not one of those instances, he said:

Bottom line is that this was a misuse of gear. But it was not, for the most part, gear obtained from the DoD. It was commercially available equipment that apparently was purchased by that local police force.

He said appropriate police use of the Pentagon-supplied equipment would include a raid on a meth lab or responses to an active shooter or a terrorist attack.

“There has to be a degree of proportionality,” Bucci said.

The protests, riots and looting escalated in Ferguson after Darren Wilson, a six-year veteran of the town’s police force, shot and killed Michael Brown, 18. Witnesses say Brown was not armed.

Kirby, when asked about the 1033 program, defended it:

I won’t speak for law enforcement, but my hunch is that many of these agencies out there would tell you that some equipment saves lives and protects citizens. And so while we’re all focused on what’s going on in Ferguson —  as we should be, and I understand that — let’s be careful not to throw the baby out with the bathwater here. And it’s a congressionally mandated program, a program that has provided a good measure of support to not just law enforcement, but to citizens all over the country.

On Tuesday, President Obama told reporters that it is time to review the 1033 program.

“I think it’s probably useful for us to review how the funding has gone, how local law enforcement has used grant dollars, to make sure that what they’re — what they’re purchasing is stuff that they actually need,” Obama said, adding:

Because, you know, there is a big difference between our military and our local law enforcement, and we don’t want those lines blurred. That would be contrary to our traditions.