Mom Arrested for Cursing in a Grocery Store 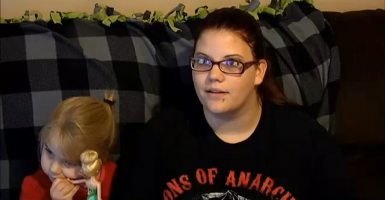 Cursing while shopping for frozen pizzas could send you to jail in North Augusta, S.C.

Danielle Wolf, a young mother, was arrested and charged with disorderly conduct after using profanity during a recent trip to her local Kroger.

The incident began when Wolf was shopping for groceries with her husband and children. She became frustrated with her husband throwing items into the shopping cart and yelled at him to be more careful, using “F–k.” Michelle Smith, another customer, overheard this remark and confronted Wolf, telling her not to use harsh language toward her children.

Wolf tried to clarify. “I said ‘No, I said that to my husband,’ that he was smashing the bread by throwing the frozen pizzas on top of it,” Wolf explained, according to a local Fox News report. Not content with an explanation or an apology, Smith alerted the local police to handle the situation.

A North Augusta police officer, identified as “Officer Smith” in the incident report, questioned Wolf outside the store about the details of the exchange and then arrested her for disorderly conduct, saying “’You’re under arrest’…right in front of my kids, in front of my husband, in front of customers,” Wolf recalled.

Parents should be discouraged from using harsh language toward their children or anyone else in public (or in private), but is the correct response to impolite, even vulgar, speech the threat of arrest or imprisonment? Police do have the authority to make arrests or issue citations when certain forms of speech cross the line and become dangerous. The U.S. Supreme Court in Chaplinsky v. State of New Hampshire ruled that the Constitution does not protect those words “which by their very utterance inflict injury or tend to incite an immediate breach of the peace.”

Even so, Wolf’s language–although indeed profane–was directed to her husband, not passersbys or fellow customers in the store. Nothing in the police report indicates she was attempting to inflict injury or incite violence with “fighting words.” Indeed, this shopping trip never would had made it to the news had someone not intruded into a private family dispute.

Like it or not, the Supreme Court consistently has upheld the right to use profanity in public discourse. In Cohen v. California, a man was arrested after he was observed wearing a jacket that said “F**k the Draft!” in a Los Angeles courthouse. The Court overturned his conviction, noting “It is, in sum, our judgment that, absent a more particularized and compelling reason for its actions, the State may not, consistently with the First and Fourteenth Amendments, make the simple public display here involved of this single four-letter expletive a criminal offense.”

Even more troubling about this story is the statute under which Wolf was charged. The North Augusta City Code of Ordinances defines disorderly conduct as uttering “while in a state of anger, in the presence of another, any bawdy, lewd, or obscene words or epithets.” Under this broad standard, consider the types of ordinary speech that could be prosecuted. How many times have you heard profanity used during a heated sporting event? Half the attendees at a local football game—and almost all the players—would be put in jail if this statute were evenhandedly applied in this context.

Statutes that broadly prohibit profane language are deemed to violate the Constitution. In Lewis v. New Orleans, the Supreme Court reviewed a New Orleans ordinance that prohibited cursing or opprobrious language directed toward police officers. Because the language of the statute was found to be overbroad, it was invalidated. Justice Lewis Powell, in a concurring opinion, disapproved of such broadly written statutes where “[t]he opportunity for abuse, especially where a statute has received a virtually open-ended interpretation, is self-evident.”

The language used by Wolf at the grocery store is nothing to applaud—unless you’re a fan of George Carlin—but the actions by the North Augusta police are certainly worthy of condemnation. Unless Wolf was causing a severe disturbance using fighting words to incite violence, her arrest never should have occurred. Just how often does the Supreme Court need to make clear that the utterance of a profanity, even in public, without more cannot be made a crime? Do the police officers in North Augusta not receive any training in the law?

There is one silver lining in this debacle: Michelle Smith, the customer who originally called the police about Danielle Wolf, made an apology to her after she was arrested