Q&A: Is It Legal to Use the National Guard in Ferguson? 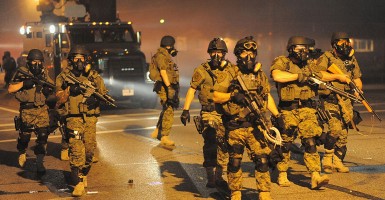 Law enforcement officers watch on during a protest on West Florissant Avenue in Ferguson, Missouri on August 18, 2014. (Photo: Michael B. Thomas/Newscom)

The decision by Gov. Jay Nixon, D-Mo., to deploy the National Guard to the troubled community of Ferguson has raised a lot of questions about these citizen soldier units. After serving with distinction numerous times in both Iraq and Afghanistan, units of the National Guard are well thought of as military fighting men. Can they also be helpful in situations like Ferguson? Here is some information to help increase understanding of these direct lineal descendants of the Minute Men.

Q: Why would the governor send the Missouri National Guard to Ferguson?

A: The National Guard have specialized training in crowd control and civil disturbances.   Additionally, the message that is sent by the presence of the military units generally have a sobering effect on crowds that police (local or state level) might not have. They are the governor’s “biggest stick” and the final resort.

Q: How is the National Guard different from the Active Duty Military?

A: The Active Duty (also called “Title 10” for the U.S. Code article that authorizes it) works for the Department of Defense all the time. They are full time military, funded by and commanded by the federal authorities. The National Guard are citizen soldiers (or airmen) who serve part time. They are normally funded by the state, and commanded by the governor through the state adjutant general. This status is called “State Active Duty.” They can also be federalized and call to federal active duty. In this status they are exactly the same as active duty troops, with the same rules and restrictions. There is also a status called “Title 32.” This status is a hybrid: the National Guard is still under the command of their governor and has the same authorities as State Active Duty, but is funded by the Department of Defense.

Q: Isn’t it illegal to use the military domestically?

A: This refers to Posse Comitatus Act, which only forbids the use of the federal military (the active duty units) for acting in a law enforcement role. The National Guard, when serving under the governor (in either State Active Duty or Title 32) specifically can support police in exactly this sort of situation. In Ferguson, the Missouri Guard is serving in their most common status, State Active Duty. They are therefore perfectly legal in the role of civil disorder control.

Q: Is the National Guard the right solution for maintaining control in Ferguson?

A: Only time will tell. The governor chose to remove the authority for policing the streets of Ferguson from local law enforcement. He first tried to use his state police. They also failed to deal with the situation adequately, and disorder continued. His next option was to call out and deploy the Guard. The entire nation hopes that this will work, the situation will begin to defuse itself and order will return to the suburbs of St. Louis.