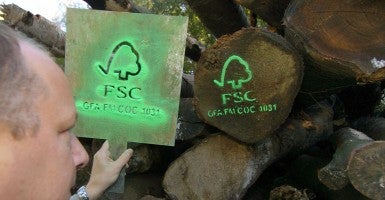 The idea to certify forests worldwide grew out of the United Nations Earth Summit in 1992. (Photo: Newscom)

Pay your protection money. Do the secret handshake. And kiss the ring.

Otherwise, forget having green activists attach their environmental seal of approval to the wood products harvested from your forest.

That’s essentially the message organizations such as the Natural Resources Defense Council, Friends of the Earth and Greenpeace will be in a position to transmit if the U.S. timber industry submits to a monopoly in forest certification, free market economists argue.

The “Big Green” lobby—mainly the organizations listed above plus the World Wildlife Fund, Rainforest Action Network and a few others—wants a relatively new player to assume monopoly control of the market.

Pay your protection money. Do the secret handshake. And kiss the ring.

Today, three share the action: the Sustainable Forest Initiative, seen as the closest to the forest industry of the three, the American Tree Farm System and the new guys — the Forest Stewardship Council.

The concept of forest certification initially gained traction during the 1992 United Nations Earth Summit in Rio de Janeiro, Brazil, when it was adopted as part of a “smart growth” strategy known as “sustainable development.”

If the Forest Stewardship Council takes over all forest certifications, it would mean higher prices, more jobs lost, and reduced economic output, according to a study last year from George Mason University’s EconoSTATS program.

The study found the Forest Stewardship Council imposed far higher costs than did the Sustainable Forest Initiative or the American Tree Forest System.

“Part of the problem with the FSC is that it takes more property off the market so that it can’t be harvested,” Wayne Winegarden, an economist and contributing editor to EconoSTATS, said of the Forest Stewardship Council adding:

FSC is more restrictive than the other standards. This is why it’s always better to have a competitive regulatory scheme. If consumers decide that higher costs that come with the FSC are worthwhile, then that’s the direction they will go. But if not, then we have other alternative standards that can balance economic and environmental concerns. The non-binding agreement that grew out of the 1992 UN Earth Summit, known as Agenda 21, promoted ecologically responsible methods of harvesting that were supposed to allow for economic development but avoid harmful levels of deforestation.

When the summit failed to produce any legally binding agreement on forest management, environmental groups stepped in to form a non-profit organization called the Forest Stewardship Council. The German-based organization, founded in 1993, now boasts more than 800 members.

In 2009, a non-profit group called ForestEthics increased the stakes by filing complaints against the Sustainable Forest Initiative with the Internal Revenue Service and the Federal Trade Commission. In the FTC complaint filed last year, ForestEthics accused SFI of violating the agency’s guidelines by “greenwashing” destructive forest practices.

Winegarden, who co-wrote the foreword to the EconoSTATS report, said:

The criticism of SFI is that it is too close to industry, and it is fine to make that argument. But the environmental groups that favor the FSC certification standard are closely tied in with the FSC and many are members. This is why it’s best not to have a monopoly in one direction or another. Let them compete with one another.

Despite pressure from environmentalists, the U.S. Forest Service has declined to endorse the standards of the Forest Stewardship Council over those of the Sustainable Forest Initiative and the American Tree Farm System.

The FSCl, Brinkema said, is “a voluntary approach that is designed to use the market as a way to help forests, wildlife and the people who depend on them for their livelihoods.”

Consumers are demanding higher levels of environmental and social performance from business, and leading companies are responding.

FSC has another issue. It implements 38 standards around the world, many of them “interim” and not fully developed. U.S. timber companies would face far more stringent requirements than those of Brazil, Russia and other nations.

The consumer who cares about the environment doesn’t know they are getting an inferior product from say, Russia, that also contributes to environmental degradation.

Ideally, suppliers should have the opportunity to substitute the Sustainable Forest Initiative’s standards, or those of  the American Tree Farm System.

But the EconoSTATS study warns environmental groups are trying to get into a position where they can block access to green markets  by green building certification program such as LEED, which stands for Leadership in Energy and Environmental Design. The U.S. Green Building Council, a non-profit based in Washington, D.C., developed the rating system used by LEED as a way to advance “sustainability” in building projects.

The Green Building Council counts more than 4,000 LEED-certified government buildings and another 8,000 registered projects. LEED has been accused of offering green points in exchange for accommodating design adjustments that do little to protect the environment. Builders can secure LEED approval “through simple purchasing decisions” that “sidestep labor-intensive options,” a report in USA Today said.

Green activists are connected to LEED as well as to the Forest Stewardship Council.

Another well-connected figure is Denis Hayes, CEO of the Bullitt Foundation and chairman of Earth Day Network.

“Greenwashing is a major impediment to environmental progress on climate, forests, toxics and many other problem areas,” Hayes has said. “I have been tracking Greenwash Action since its conception, and I believe this is the right initiative at the right time.”

The Bullitt Foundation has made grants to the Forest Stewardship Council since 1993, Hayes said in media interviews.

So far, though, the Forest Service hasn’t given a nod to the standards of the Forest Stewardship Council and brushed off those of the Sustainable Forest Initiative and the American Tree Farm System.

Timothy H. Lee, senior vice president of legal and public affairs at the Center for Individual Freedom, hopes it stays that way.

Lee told The Daily Signal that Greenwash Action has demonstrated a “willingness to misinform environmental stakeholders and the general public” in pursuit of an “extremist agenda.”

Greenwash Action may present itself as a disinterested party, he said, but the facts show the organization is an advocate for LEED and a monopoly for Forest Stewardship Council wood products.

He said Grant, executive director of Greenwash Action,  “has made a living providing consulting services for businesses attempting to get FSC and LEED certification.”

The participation of other building certification programs would mean “more competition for certified wood, and in turn a smaller market share for FSC timber and LEED projects,” Lee said:

That would obviously run contrary to the interest of his clients, so it’s unsurprising to witness him promoting the mission of Greenwash Action.

Other board members of Greenwash Action hold, or have held, official positions with LEED and the Green Building Council, Lee said, and that does not inspire confidence:

Greenwash Action’s supporters spread misleading information about sustainable forestry practices, work to block competition in building markets and have direct financial ties to the causes they support. But the more people become aware of these facts, the better the chances of an informed debate about developing policies that benefit more than just those in positions of authority who possess a vested financial stake in the green cause they advocate.