Most Americans Disapprove of Media’s Coverage of Ferguson 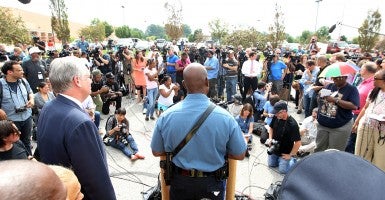 Most Americans say that things would be different in Ferguson, Mo., if the racial roles had been reversed. According to a Rasmussen Poll released today, many believe the media’s coverage of the incident would differ if a black police officer had shot a white teenager.

A majority, 54 percent, agree the media would have reported the death of Michael Brown differently according to the color of his skin. Regardless of race—white, black and other minority adults—most believe the shooting would garner less media attention.

As things stand now, however, only about 1 in 3 Americans approve of the media’s coverage of the incident.

Regardless of media dissatisfaction, 57 percent of blacks believe the police officer involved should be found guilty of murder. The majority of white and other minority Americans do not agree.

Allegations of systemic police racism aren’t widely accepted. Sixty-one percent of Americans say police are not racist as opposed to 14 percent who say they are.

A mere 34 percent believe race relations are at a favorable state in the nation today.

The Rasmussen telephone poll surveyed more than 1,000 individuals from around the country, and comes little more than a week after the untimely death of Michael Brown on Aug. 9. His death brought national attention to Ferguson, where riots have pitted police against protesters.